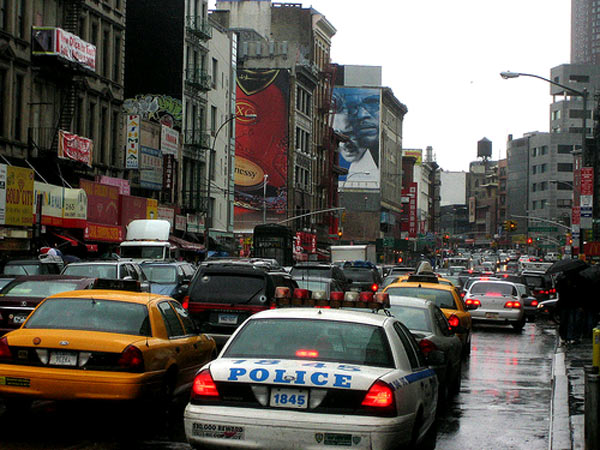 The Assembly was meeting in Manhattan, while the State Senate was meeting in Albany; theDaily News explains, "no deal could possibly get passed" without both houses in Albany. And while State Senate Majority Leader Joseph Bruno said the Senate bill on congestion pricing would pass, he was short by at least 12 votes. Bruno did took the opportunity to accuse Governor Spitzer of a "failure in leadership," but the NY Times reports that the Mayor seemed to make his own Senate enemies.

In a tense meeting on Monday, testy exchanges erupted between the mayor and the Democratic state senators he was trying to win over. At one point, according to several people present, Mr. Bloomberg told the senators that his administration had sent plenty of information about his plan in the mail, and that it was not his fault if they had not read it.

“If the mayor came in with one vote, he left with none,” said Senator Kevin S. Parker, a Brooklyn Democrat.

“His posture was not ingratiating,” he said. “He says he doesn’t know politics, and he certainly bore that out by the way he behaved.”

So angered were Democrats that they decided to vote as a bloc to defeat the measure, and there were not nearly enough votes among the Republican senators for it to pass.

Ah, that's the Bloomberg we know and love/hate - telling his constituents (in this case, the lawmakers who wield ultimate power to make or break his plan) what they do and do not know or understand. Still, State Senator Eric Schneiderman told the Daily News, "It's not dead yet. It's staggering around with blood pouring out of its guts, but it's not dead yet." Well, for some, congestion pricing is like a horror movie.

Silver did offer to create a commission to study congestion pricing, but the mayor and Bruno have said that federal funding will only come with approval for congestion pricing itself, not a commission to study it. Interestingly, the Assembly also wants to "scour the MTA capital plan and hear from the City Council before voting" (per the Daily News). We hope Silver and other legislators consider how the state has reduced its funding to the MTA in the past years. The commuter tax goes to a general fund, whereas congestion pricing revenue would be earmarked only for mass transit projects and other projects to make sure the city is in a "state of good repair."

Right now, Bloomberg and Spitzer are reportedly working on a tentative proposal to keep the plan alive and to make a late appeal to the federal government. At 11:30AM, the Mayor has a press conference, and we'll imagine he'll mention congestion pricing at some point. He issued this statement:

Although we continue to talk to the Legislature and the Governor, it’s sad to note that after 3 months of working with all parties to address their questions, the failure of the State Assembly to act in time on a deadline imposed by the federal Government is a terrible setback for clean air and to our critical commitment to fight climate change.

I can’t ascribe motives to the lack of action in Albany, but I can definitively say the environment and the future quality of life in New York took a beating. This Administration will continue to work with the more than 140 civic, business, environmental and labor organizations that support our plan to make progress, and we will continue to press for real solutions, not interminable study groups whose only real purpose is to avoid accountability and results. Therefore, we will work to implement the initiatives contained within PlaNYC. While business as usual in Albany may be an impediment to congestion pricing at this time, we can still make a difference for the future of our City and create a greener, greater New York.

: During a press conference to discuss the city's efforts in fighting illegal guns (and to shame Congress for not repealing the Tiahrt amendment), Mayor Bloomberg was asked if congestion pricing was dead - or if there were any last-minute plans to save it. He said all he knew was that the city missed the federal deadline for the $537 million in federal funds. He emphasized that the loss was not a Bloomberg administration loss, because he and his people will fight for lots of plans - the losers are the people of NYC who have to breath the air, the people who have businesses here, the 95% of people who use mass transit to commute to the city.

Photograph of a traffic jam downtown by H2D2 on Flickr