A strange story has trickled down from the pustulent boil of corruption that is our state capital. The editor of investigative reports for the Albany Times Union (known among some local wags as the Times-Useless) is claiming that local police targeted his wife's spa in a phony prostitution sting, as retaliation for a series of articles about shady police activities. There's a lot to unpack here, but most of it can be summed up with this juicy quote editor J. Robert Port gave to the NY Times: "Obviously I have pissed some people off enough to the point where they would send in jackbooted thug police officers to do an anal search on someone I believe they thought was my wife."

Port's wife, Bin Cheng, was not at the premises when police moved in to arrest 53-year-old Mia Lin, accusing her of offering an undercover officer a happy ending. Port claims that the police officer “stripped naked and masturbated in front of” Lin, who denies the charges. The Albany spa is not licensed for massage, but Lin is a licensed esthetician, and the Times Union reports that light massages are an approved practice in that field.

The prostitution investigation was launched after the sheriff's drug unit received information from a local police officer who rented space to Cheng; he says neighbors had complained that the spa was only frequented by men. Surveillance and investigations were conducted in January, but apparently went nowhere—until March 13th, two days after the Times Union published a front-page story about how the head of the sheriff’s drug enforcement unit, John Burke, was drawing a pension on top of his salary. 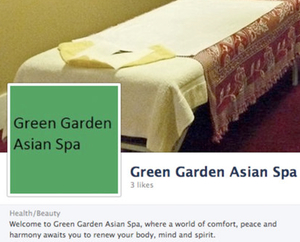 The Times Union had also reported on how the drug enforcement unit allegedly used criminal-seizure assets to purchase expensive take-home vehicles, prompting an internal investigation. Burke and other members of the unit, coincidentally or not, led the probe into Port's wife's spa. Sheriff Craig Apple tells the Times Union he is "very bothered" about the origin of the prostitution sting and will conduct an internal investigation. He disbanded the drug unit the day after Lin's arrest, but says it had nothing to do with the spa investigation.

Albany police chief Steven Krokoff also seems troubled by the arrest, telling the Times Union, "When we do prostitution in the city of Albany normally we deal with more of the street-walking type cases... These longer-type cases, that's not usually something we tackle. If I'm going to devote those types of resources it's usually going to involve violent crime."

And Lin's attorney, Kevin Luibrand, says, "You have a 53-year-old woman with no prior prostitution arrests, allegations or convictions. Somehow they're asserting that at age 53 she begins a life in prostitution? It's ridiculous. The timing of the action and the resources submitted going into the business is disproportional." Forget it, Kev, it's Albany.

#Albany
#payback
#prostitution
#times union
Do you know the scoop? Comment below or Send us a Tip