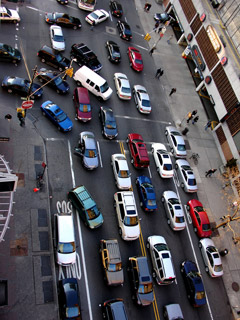 The fate of the controversial plan to charge drivers entering Manhattan below 60th Street lies with Albany, as state legislators must decide whether to approve the plan by midnight tonight. But Assembly Speaker Sheldon Silver said last night, "There isn't a groundswell of support for it" among other Assembly members. But most papers are saying the plan is effectively dead.

If Albany can approve congestion pricing today, then the city is eligible for $354 million in federal funds to implement the plan (if not, that money is directed to other cities). Mayor Bloomberg begged lawmakers to pass it, saying yesterday, "[Lawmakers] going to be responsible to their constituents as to why they don’t have buses. When we stop work on the Second Avenue subway, they’re the ones that are going to have to answer.”

Bloomberg also wants the Legislature to hold a vote, "The one thing they can't do is walk away without a vote. That would be unconscionable." (It would also help see where certain Assembly members stand on the issue, so congestion pricing opponents in the Assembly can be identified.) Deputy Mayor Kevin Sheekey even said on Fred Dicker's radio show, “If the leadership does put this bill on the floor in the Assembly or the Senate tonight, it will pass. I give you my thousand percent guarantee on that.”

If you support congestion pricing, you can call your representatives in Albany to let them know you do.

#Albany
#Assembly Leader Sheldon Silver
#congestion pricing
#mayor bloomberg
Do you know the scoop? Comment below or Send us a Tip