Albany Drops the Ball on Anti-Flier Bill, to Councilman's Frustration 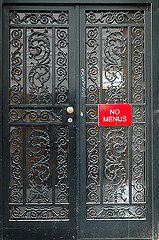 Brooklyn Councilman Simcha Felder is frustrated with Albany's politics and politicians for derailing his relatively simple bid to rid New York City of fliers and takeout menus. Back in April, Felder introduced a bill to the City Council that would have imposed fines on restaurants and businesses that dropped unsolicited materials on people's property. He was spurred to action after his mother was fined several times for having litter on her property––takeout menus that someone else had left there.

Felder's bill would have gone through the City Council, but the issue was taken up by the NY State legislature. Both the Assembly and the state Senate approved a bill over the summer that would fine businesses anywhere from $250 to $1,000 for the distribution of unwanted fliers, menus, or advertising circulars. In August, we wrote that the city wouldn't be enforcing the law until the fall because adjustments needed to be made to the legislation to account for multi-family dwellings, like large apartment buildings and co-ops.

Any amendments that would have led to the finalization of anti-flier legislation were stymied over the past several weeks, however, as the state Assembly scaled its calendar back in an effort to prevent Republicans from attaching amendments counter-acting Gov. Spitzer's plan to issue drivers licenses to illegal immigrants. That issue is completely unrelated to fliers and takeout menus littering New Yorkers' property, but the legislative logjam it created has foiled Felder's initiative.

The Councilman expressed his frustration in a press release yesterday. “I was under the impression that regardless of the shenanigans going on in Albany, the Legislature would still be able to come together and do the people’s work. A simple piece of legislation on an issue that the State already supported, one that would help thousands of New Yorkers, could not even get passed.”