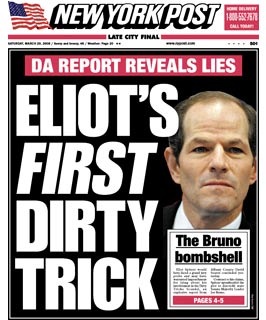 Interestingly, Soares says if Spitzer had not resigned, he could have faced impeachment or other disciplinary action because he lied about his involvement, repeatedly claiming he knew nothing about it, with the so-called Troopergate scandal (state police troopers' records were involved).

Per Spitzer's former communications director Darren Dopp, originally Spitzer was told that Albany newspaper the Times Union was interested in Spitzer's use of state aircraft. Then the Times Union asked about other users of state aircraft, which the high-ranking state officials share. A plan was hatched to bring down State Senate Majority Leader Joseph Bruno, who enjoys his perks. Dopp told Spitzer Bruno would be "pissed" if records were released, to which the Steamroller said, "F--- him! He's a piece of s---! Shove it up his ass with a red-hot poker!"

The 20-page report also cites Dopp's wife Sandy ripping into Spitzer's counsel David Nocenti for their mishandling of the affair (Dopp was in the midst of taking the fall), claiming she and her friend could have "handled it better than you guys...[and] like, we're housewives" and details emails between Spitzer and other aides assessing whether the media coverage about Bruno's state travel hit hard enough.

However, the report also says, "To the extent that there may be misconduct, nonfeasance or neglect, considering the recent, unforeseeable resignation of Gov. Spitzer and other senior aides, the DA does not have a statutory vehicle to address the matter." In other words, no other charges will be brought. [You can read the whole report here - PDF].

Dopp's lawyer says the report shows his client was a punching bag. And the Post is reveling in how it had pegged Spitzer as a liar from the beginning.