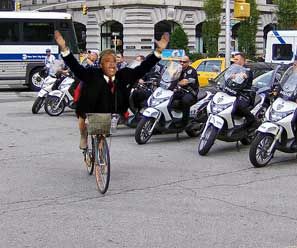 Tonight’s monthly Critical Mass bike ride and rally will have some additional cachet thanks to the outspoken activist, as he joins the cyclists to highlight a “common pattern of NYPD harassment experienced by diverse groups of law-abiding citizens,” according to the press release from the Time’s Up! group.

You’ll recall that before the Republican convention came to town in 2004, the NYPD tended to cooperate with the Critical Mass rides in Manhattan, where cyclists fill the streets to promote bicycle commuting. But when the police began rounding up over a thousand demonstrators the weekend before the convention, the big Critical Mass protest was a major target for arrests. There’s been an aggressive stance from the NYPD toward Critical Mass ever since, despite a court ruling. Police have even gone so far as to arrest one activist for reciting the First Amendment in Union Square Park.

Now Al Sharpton’s riding into the fray. Tonight he’ll be joined in a pedicab by Sean Bell’s fiancé Nicole Paultre-Bell, as well as former NYCLU director Norman Siegel. The ride kicks off after a 7 p.m. rally in Union Square. To get pumped up for tonight, enjoy these greatest hits videos of police brutality from past Critical Mass rides.

#al sharpton
#bicycle
#critical mass
#cycle
#ride
#sean bell
#time's up
Do you know the scoop? Comment below or Send us a Tip