As part of its ongoing effort to persuade the City Council that it's here to help the middle class, Airbnb has launched a public relations push highlighting its positive economic impact on the city's predominantly-black neighborhoods, from Crown Heights and Bed-Stuy in Brooklyn, to West Harlem and the Rockaways.

According to the startup's latest internal analysis, Airbnb is growing faster in black neighborhoods than elsewhere in the city, and in Bed-Stuy/Bushwick most of all. The number of Airbnb guests in 30 NYC zip codes with the most black residents jumped 78% between 2014 and 2015, compared to 51% city-wide. Per-zip code data shared with Gothamist shows that the number of guests in the 11221, which covers sections of Bed-Stuy and Bushwick, jumped 86% last year, to 39,494. The 10030, in West Harlem, saw a 65% increase in guests, to 10,557.

Other neighborhoods with a recent influx of Airbnb users include Wakefield and Edenwald in the Bronx, Averne in the Rockaways, and Southeast Queens near JFK Airport.

Airbnb hosts across these neighborhoods pocketed more than $43 million combined last year, according to the startup. The average per-host annual take-home was $6,100. "This impacts everyone: from the coffee shop in Harlem to the food stand in Flushing to the thousands of Airbnb hosts," said the company in its analysis. "That is money they’re using to pay the rent or mortgage, start small businesses, and save for retirement."

But local politicians and advocates, as well as independent data analysts, challenge that Airbnb has played a role in furthering gentrification in the neighborhoods it purports to boost. These groups have long argued that the startup isn't doing enough to discourage illegal hotel operators—bad actors who flip entire apartments into year-round Airbnb listings, jeopardizing the safety of longterm tenants and snatching up a significant portion of the city's already-dwindling affordable housing stock.

"Airbnb is a gentrifying tool that is being used by people moving into these neighborhoods, who are displacing long-term residents and turning around and renting [on the platform]," said Bed-Stuy based data analyst Murray Cox.

Airbnb's report does not include the racial demographics within each focus zip code, so there's no indication of how many of the hosts are black. Cox has developed a beta map showing Airbnb data from the fall of 2014, which includes host photos for each pinpointed listing on the NYC map. You can peruse it here.

Data analyst and 1 Quant NY blogger Ben Wellington says that any data analysis released by Airbnb should be assessed with asterisks, since the app keeps much of its data secret. "When you withhold data on a mass scale, it's very easy to pick and choose and tell a positive story," he said. "Their last data dump forced you to go down to their office [to look at it]. Any time someone does science, but doesn't release the data behind the science, there's suspicion." 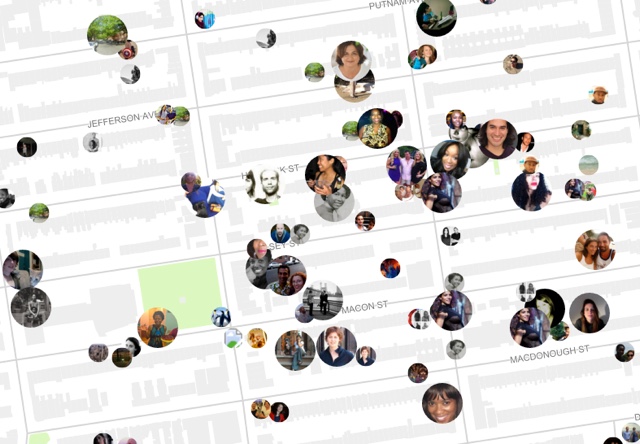 A sliver of Bed-Stuy (via).

Cox's own analysis, Inside Airbnb, maps the public information associated with every single Airbnb listing in New York City. The map can be filtered to show how many nights a particular listing is rented per year, whether the listing is for an entire home or a private room, and whether the host is associated with multiple listings.

In Crown Heights, one of the neighborhoods targeted in Airbnb's report, Cox's crunching shows that out of 1,148 listings, 44.6% are for entire apartments (which is against the law for most people), and a quarter of them are managed by hosts who are juggling multiple listings. For Cox, these signs point to fishy behavior; these hosts are "more likely to be running a business," he says.

In Bed-Stuy, which includes the NYC zip code with the most black residents documented in Airbnb's report, Inside Airbnb shows 2,013 listings, 45.7% of which are for entire apartments, and 28.6% of which have multiple listings.

Airbnb's new report emphasizes that hosts in predominantly black neighborhoods are more likely to rent out a single room than the city as a whole—58%, compared to 44% city-wide—"creating a great opportunity for retirees, empty nesters and anyone with a little extra space to make a bit of extra money."

"They put the spin on it, emphasizing that it's less than 50% [full apartment listings]," said Cox.

"The company is highlighting that 58 percent of hosts are offering private rooms as opposed to whole apartments, however that still leaves nearly 50 percent of their hosts contributing to the lack of housing options in the city," echoed council members Jumaane Williams and Helen Rosenthal, longtime critics of the platform, in a statement to DNAInfo.

Williams and Rosenthal also challenged that the report doesn't indicate whether the hosts are renters, or owners. In Bed Stuy, 78.1% of residents rent. In Crown Heights, renters make up 82.9% of the population.

If these hosts are renters, the council members stated, "more likely than not, the apartment owners do not live in the same communities they are profiting from."

#airbnb
#bed stuy
#black neighborhoods
#Crown Heights
#data
#Number crunching
Do you know the scoop? Comment below or Send us a Tip