Airbnb Ad Reminds Everyone How It Saved NYC During Hurricane Sandy

Airbnb is in the midst of an all-out PR blitz to win the hearts and minds of New Yorkers as it engages in a legal battle with the state's Attorney General, who has a mild problem with the room-sharing service's general illegality. After plastering the subways with advertisements promoting "real" New Yorkers' adoration of Airbnb, the company has now shifted to your television screen with a simple message: Remember when we helped you during Hurricane Sandy?

Over the weekend, the company premiered a new advertisement that pairs images of the disaster with the kindness of Airbnb hosts who offered their homes out for free to victims of the storm. The advertisement, which asks New Yorkers to visit airbnbnyc.com, a website that touts the beneficial impacts of NYC on the city, banks on the goodwill earned during a time of desperation. It's also a retread of an earlier advertisement that promoted Airbnb's emergency relief service, and not its ongoing legal conflict. But times have changed.

Once directed to the website, New Yorkers can peruse through a variety of facts about the apartment-sharing service, minus the data that Airbnb doesn't really want you to see. That would be the data about which buildings Airbnb is utilizing the most, data that they voluntarily handed over to the New York Attorney General's office. In turn, the Attorney General also declined to share the information in response to a Gothamist FOIL request.

The recent advertisement highlights what Airbnb sees as its beneficial impacts on New Yorkers, while doing an extremely adept job at obfuscating its destructive impact on affordable housing.

While tweets like the one below offer only Airbnb as a source for the information, the sentiment reflects a dark cycle for tenants in New York City:

RT if you support @Airbnb in NYC: Nearly two-thirds of #AirbnbNYC hosts say it helps them stay in their home. pic.twitter.com/PvqT4cYmqR

This 62% of tenants (which again, is according to Airbnb and not sourced independently) is actually using the service to help pay their rent, rent which continues to increase as landlords wise up to the idea that tenants are generating income from their apartments. Even while the Attorney General holds back information as to which neighborhoods Airbnb is most popular, the service helpfully supplies a graphic to give us an idea: 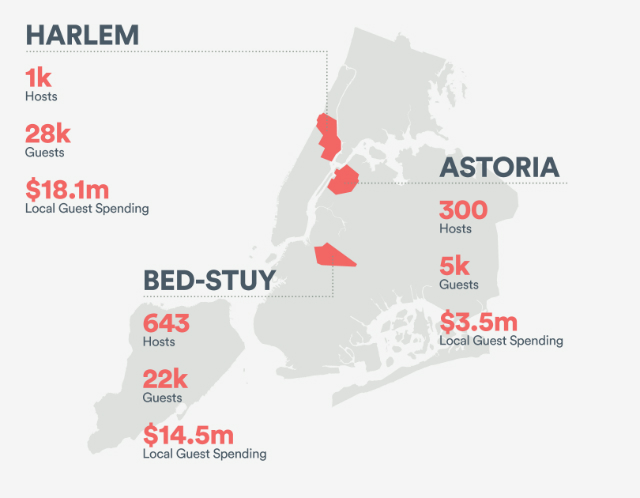 But what ever could these neighborhoods have in common?

Harlem has seen an increase in rental prices of 13.9% this year, while Bed-Stuy was up a whopping 42% last year. Astoria also saw some significant gains. Essentially, tenants are playing catch-up with rising rents and have turned to Airbnb to help pay those rents (the same rent that Airbnb has helped drive up). Seems like a pretty good deal for Airbnb!

Which makes this most recent advertising scheme all the more sinister. While helping to further skew what is already an almost irredeemably broken housing market, Airbnb would like to remind us that it helps people who are made homeless by natural disasters while ignoring those that are priced out through rising rents.

#airbnb
#hurricane sandy
#new york city
#rockaway
Do you know the scoop? Comment below or Send us a Tip