Airbnb Accuses NYC Lawmakers Of "An Attack On The Middle Class"

"Watching you is like watching an attack on the middle class," Airbnb's global policy head Christopher Lehane told Councilmember Jumaane Williams, chair of the Housing and Buildings Committee.

"You remind me of that movie Mars Attacks," Williams retorted. "Where the martians would say, 'we come in peace' while they’re shooting people."

Councilmembers and advocates have long argued that Airbnb—which had 30,483 active units in NYC as of September 1st—should be transparent about New Yorkers who use the platform to operate illegal hotels. Unlike the cheery couples renting a spare room in Airbnb subway ads, these operators, they say, jeopardize the safety of longterm tenants, break state laws, and snatch up a significant portion of the city's already-dwindling affordable housing stock.

Originally introduced back in June, new legislation up for discussion today would increase fines for illegal hotel operators, which currently hover between $1,600 and $25,000, to a minimum of $10,000, and maximum of $50,000.

The state's Multiple-Dwelling Law prohibits New Yorkers from renting out entire apartments for under 30 days if the tenant on the lease is not present. The 2010 law does not apply to owners of single-family and two-family homes, or residents who rent out individual rooms in their homes for less than 30 days (as long as they are also there the entire time).

To bolster his claims that the law would punish casual Airbnb hosts, Lehane summoned sympathetic witnesses.

Linola Stone, a Manhattan host, told the councilmembers that she was a reservist in the Coast Guard who often had to pack up and leave on short notice. She described a month when she was out of work. "I was selling ink cartridges on Craigslist so I could afford milk," she said. "Airbnb was absolutely a lifeline at that point of my life."

"I understand that I'm not your target audience, but I'm worried about unintended consequences," she added.

Maria Rios of Staten Island testified through a translator. "I'm a single mom," she said. "I've been able to maintain my home through Airbnb and, though I own my home, I'm here to make sure this legislation doesn't get applied to a homeowner like me."

Yet the councilmembers said that the multiple renters who testified on behalf of Airbnb likely would not be impacted by the legislation.

"Let's be clear: Ms. Rios is not who the law applies to," said Councilmember Hellen Rosenthal dismissively. "Why is she here?"

Vito Mustaciuolo, Deputy Commissioner of Enforcement at the NYC Housing Preservation and Development [HPD], testified that "the problem of illegal hotel rentals is not homogenous. We support the overarching goal to deter the most egregious offenders." 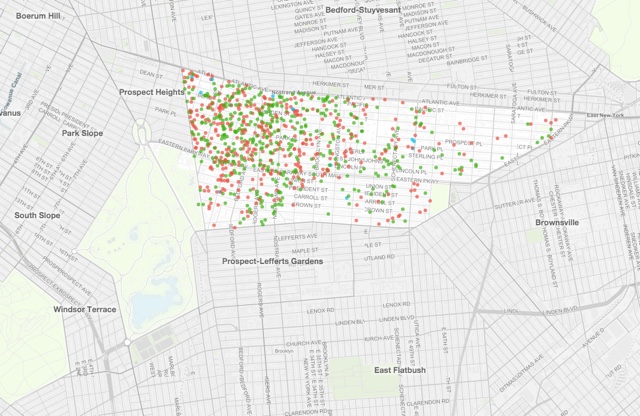 Airbnb listings of Crown Heights, as of June 1st. The red dots represent entire apartments/homes rented (via Inside Airbnb).

Airbnb stated in a September 2014 press releases that 87% of their users "share the home in which they live," but did not supply supporting data.

Last fall, a report from Attorney General Eric Schneiderman's office found that in 2013 alone, 4,600 apartment units were rented out on Airbnb for three months or more, and almost 2,000 of them for six months or more.

InsideAirbnb, a Bed-Stuy-based photographer's map of all of Airbnb's public information on NYC listings, found that 53% of the city's 27,469 listings are rented out for more than 60 nights per year, and 30% of them are managed by hosts who have more than one Airbnb listing to their name.

"These [illegal hotel] operators are making six figures a year, even seven figures a year, so if we didn't have fines that were substantial, they would simply be written off as a cost of doing business," said Councilmember Mark Levine, addressing affordable housing advocates on the steps of City Hall before today's hearing.

Another piece of legislation up for review calls for a mandatory annual report on the total number of illegal hotel complaints filed, as well as violations issued, and penalties collected. A third bill, sponsored by Councilmember Levine, would amend HPD's tenant guidebook to explicitly state a tenant's legal right to withhold rent if his or her landlord is operating illegal hotels out of the building.

In anticipation of today's council hearing, Airbnb sent an open letter to the City Council signed by Airbnb hosts, arguing that the service helps New Yorkers supplement their income in a city with very high living expenses.

"What we're concerned about is that the law protects... that teacher, that grandma," Lehane told the councilmembers. "Let's make sure those folks are protected."

"You conflate who we're trying to go after with sympathetic people who are using your service who we want to support," councilmember Williams replied. "It's smart on your part as a business move, but it makes it difficult to do this work. The reason you [do this] is because you make a lot of money off of the bad apples."

Williams added, "We are not trying to go after a grandma who rents on the weekend to go on vacation. If there's someone who rents 20 weekends out of the year, that's illegal."

"I live in a trendy neighborhood [in Brooklyn]. I do know a grandma. She’s an empty nester," James said. "Grandma rents out rooms to Airbnb. Grandma comes home and says, why are you trying to regulate Airbnb? I continue to explain to grandma that the regulations do not apply to her. Some grandmas do not apply.”