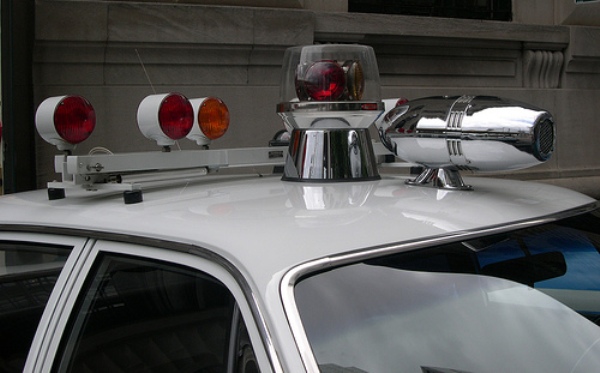 If you're looking for a good way to mimic the great NYC outdoors, check out the NY Times article about police car sirens - the Times even has a separate page with MP3s of all the different sounds. While demonstrating the different siren sounds to Times reporter Cara Buckley, Officer Spiros Komis made his work sound like he's a DJ when trying to get someone to stop speeding:

“I go through the whole mode,” he said, his fingers hovering above a dash-mounted keyboard that controls a police car’s lights and sounds.

“Most highway officers hit the air horn,” he said. A gray Toyota RAV4 that had taken the Acura’s place ahead of the squad car quickly swung out of the way, too, as its driver stared fixedly ahead. The car in front of the RAV4, a gray Volvo, also pulled out of the way.

“Like a hot knife through butter,” Officer Komis said, satisfied.

However, Komis said, "Elderly people are trickier. You might need to pull out the public address system. And an individual attempting to flee is not going to respond to anything.”

Definitely check out the MP3 for the Rumbler, a new siren sound the NYPD is considering. It's called the Rumbler because it also causes vibrations. We think it sounds like something out of a video game.

#But I
#dj
#elderly
#mp3
#News: NYC
#ny times
#nyc
#nypd
#people
#photos
#police
#Then I
#video
#video game
Do you know the scoop? Comment below or Send us a Tip
A new Gothamist is coming! We’ve moved comments over to our beta site. Click here to join the conversation and get a preview of our new website.