The AP reports that the Air Force is no longer distributing a brochure about Sex Assault Prevention that advised victims to consider submitting to their assailants instead of fighting back. The brochure (see below) was issued to airmen at Shaw Air Force Base in South Carolina, where nearly 10,000 military and civilian personnel are assigned, and first dug up for the wider population by Wired. “It may be advisable to submit [rather] than resist,” reads the brochure. “You have to make this decision based on circumstances. Be especially careful if the attacker has a weapon.”

Since the brochure was made public, it's been widely criticized for that bit of advice, as well as a general failure to advise service members on not committing sexual assault in the first place. Rep. Louise Slaughter, D-N.Y. was among those infuriated by the brochure, and after complaining to the Air Force, she's been told the it's no longer in use. "We have reviewed the Shaw Air Force Base brochure you mentioned in your letter,” Jessica Wright, acting undersecretary of defense, wrote to Slaughter. “We share your concerns over some of the materials presented, and the Air Force has withdrawn the brochure from circulation."

A recent report from the Pentagon estimates that as many as 26,000 military members have been victims of sexual assault. In May, a sergeant at the United States Military Academy at West Point was accused of secretly filming female cadets in the shower, and Lt. Col. Jeffrey Krusinski, 41, served as a branch chief for the service's Sexual Assault Prevention and Response program. Earlier that same month, the Air Force officer in charge of a sexual assault prevention unit was arrested on sexual battery charges.

“No service member wearing the uniform of the United States military should ever be told ‘it may be advisable to submit than to resist’ in the case of a sexual assault,” Slaughter said in a statement. “I am cautiously optimistic about the Pentagon’s agreement to review all sexual assault prevention materials. We have to change the military culture if we want to stop this epidemic of sexual assault, and this response is a step in the right direction and a small victory for victims.” 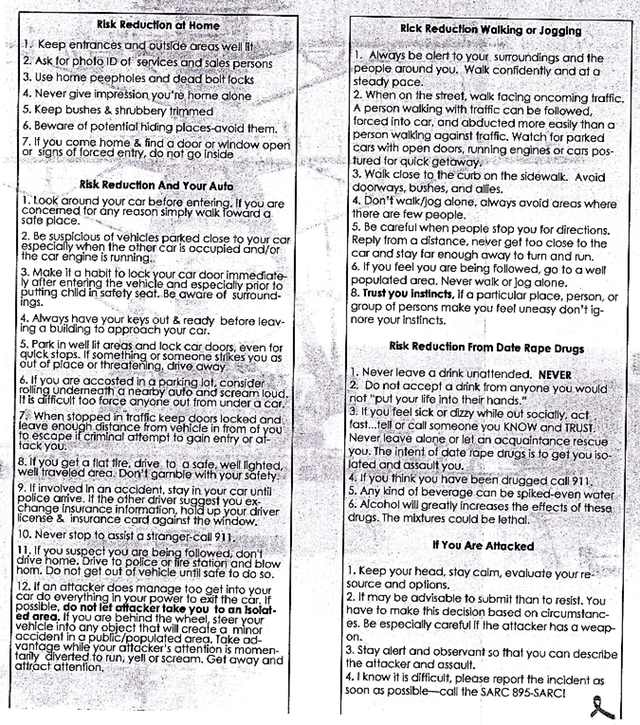 (The brochure, via Wired.)

#air force
#sexual assault
Do you know the scoop? Comment below or Send us a Tip