After its disastrous snowy first go-round, the MTA held its second public hearings yesterday in Manhattan and the Bronx regarding its upcoming fare hikes—and if you enjoy spending three hours listening to New Yorkers rail against a row of white men who aren't allowed to do anything but sit there and listen, you would have loved it. As for opinions on the four specific fare hike proposals the MTA is choosing between, only one person in Manhattan actually expressed one (he liked option 1a). But still, it seems pretty clear that the average New Yorker who can get to one of these hearings is not in favor of another fare hike.

There is something marvelously democratic about the MTA's hearings: MTA officials line up at a table and sit silently for hours on end as New Yorker after New Yorker from all walks of life—straphangers and drivers, transit workers and lawyers, politicians and laymen, rich and poor—systematically tell them what is what in three minute chunks. In the end, none of it probably means anything—we're getting a fare hike people—but the opportunity to listen to involved New Yorkers speak their minds sure is cathartic. Here's what we took away from last night's hearing (which, thank God, will eventually be put up online so you can enjoy it too—the second person to speak sang the best anti-fare hike song): 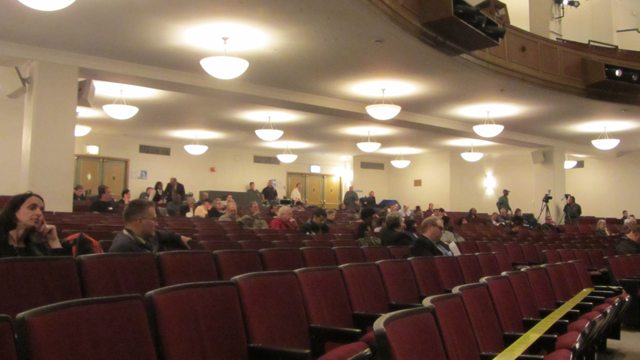 Even without a Nor'Easter there really weren't that many people in the audience last night (Garth Johnston / Gothamist).

All of which is to say, you guys missed a fun time with the MTA last night! Wish you were there? Don't worry, the Staten Island (11/24), Queens (11/15), Westchester (11/15) and Orange County (today) hearings are still coming up if you want your voice to be heard—and promptly forgotten.