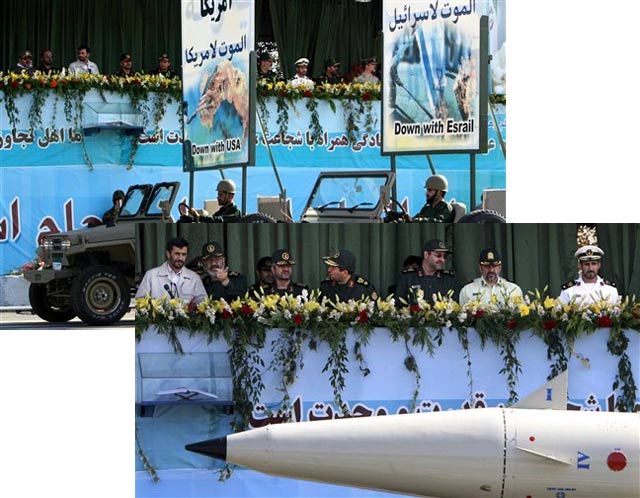 Iranian President Mahmoud Ahmadinejad headed to New York today, but not telling Iranian state-run TV, "The United States is a big and important country with a population of 300 million. Due to certain issues, the American people in the past years have been denied correct and clear information about global developments and are eager to hear different opinions." He added that the U.N. General Assembly was an "important podium" for Iran's views to be expressed.

And Ahmadinejad also appeared at a parade in Tehran. But not just any kind of parade. From 1010WINS:

A day before flying to New York to speak directly to the American people, Ahmadinejad struck a confrontational tone Saturday with a parade of fighter jets and missiles and tough warnings for the United States to stay out of the Mideast.

Three new domestically manufactured warplanes streaked over the capital during the parade marking the 27th anniversary of the Iraqi invasion of Iran, which sparked a 1980-88 war that killed hundreds of thousands of people. The parade also featured the Ghadr missile, which has a range of 1,120 miles, capable of reaching Israel.

Some of the missile trucks were painted with the slogans "Down with the U.S.'' and "Down with Israel.'' The parade also featured unmanned aerial surveillance drones, torpedoes, and tanks.

Yeah, the NYPD would never, ever approve this kind of parade. The NYPD ans Secret Service have also barred the Iranian guards protecting Ahmadinejad not to carry guns, according to Daily News sources.

The Iranian leader will also be speaking at Columbia University tomorrow at 1:30PM, and the school is bracing itself for thousands of expected protesters. Of course, the press is eating up School of International and Public Affairs dean John Coatsworth's statement on Fox News yesterday, "If [Adolf Hitler] were willing to engage in a debate and a discussion, to be challenged by Columbia students and faculty, we would certainly invite him." Oh, well, here's the clip:

Today, Assemblyman Dov Hikind held an anti-Ahmadinejad press conference outside of Columbia's gates. Via Bwog, there are tons of anti-Columbia Facebook groups now. And check out the Columbia Spectator's Ahmadineblog; best post so far: One person didn't quite understand that the college newspaper didn't actually invite Ahmadinejad. Tomorrow's protests at Columbia are beginning around 11:30AM, but protesters are gatherings much earlier.