Ahead of Super Bowl, Brady Walking in NYC With Boot 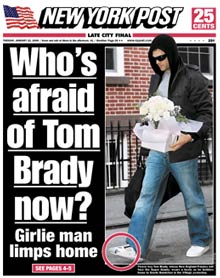 Tom Brady sure loves New York, huh? Not only does he walk around town wearing a Yankees hat, but he comes here to spend time with his ubermodel girlfriend Gisele Bundchen in the weeks leading up to the Super Bowl. Brady was spotted walking to Bundchen's West Village apartment Monday carrying flowers (how sweet) and wearing a protective boot on his right foot.

About the injury, Brady said that it's not a big deal, "Ah, you know, there's always bumps and bruises. I'll be ready for the Super Bowl. I'm not worried about that. I'm not missing this one. I'd have to be on a stretcher to miss this one. There will be treatment this week. In games like this, you get a little nicked up. It's nothing serious."

While Brady says the injury isn't serious, The Post talked to Dr. Rock Positano, a foot and ankle specialist from the Hospital for Special Surgery, about the injury. Dr. Positano said that if you're wearing the cam walker (the boot), "that usually means you're hurting. He's sustained some kind of trauma that requires immobilization. This is not just a simple strain or a sprain." While it's obviously impossible to know what Brady's injury is, that didn't stop the good doctor from speculating about an injury to the metatarsals or Achilles' tendon. "The fact that he's in a cam walker should make Giants fans very optimistic, and should certainly make Michael Strahan, or any defenseman who sees that, salivate."

The Patriots had no comment on the photos of Brady walking around. Perhaps the injury was one cause for the relatively poor performance against the Chargers in the AFC Championship when Brady was 22/33 for 209 yards, 2 TDs and 3 INTs.