Ahead Of Possible Fare Hike, Riders With Disabilities Split On Whether They Should Pay More Too

Valerie Joseph went to see the Lion King on Broadway a few years ago, but she couldn’t tell you how the show began.

“I got there during intermission,” said Joseph, who uses a wheelchair and relies heavily on Access-a-Ride to get around. “I left two hours later than I was supposed to, so I was outside for two hours after the show!”

That night she relied on the typical Access-a-Ride multi-passenger vehicle which must be scheduled a day in advance and isn’t the most reliable. Joseph recounted her Broadway experience from the back of a wheelchair-accessible taxi last week. She ordered it from her phone just minutes beforehand. It was roomy and clean; the driver courteously helped her with the ramp and locking mechanisms.

“This is much more comfortable,” she said.

And at the end of the trip, she paid the driver what he was owed: $2.75, the base MTA fare, in exact change.

Joseph works as an advocate at a non-profit called the Brooklyn Center for Independence of the Disabled. She’ll tell you Access-a-Ride service has gotten slightly better over the years (and the latest Customer Satisfaction survey shows a similar trend in perception), but two major drawbacks remain: the scheduling and the payment system.

For traditional Access-a-Ride, riders must pre-schedule every trip, at the latest by 5pm the day before. That means no last-minute meetings, doctors appointments, or social calls. And despite this meticulous pre-planning, many users say their vans regularly show up later than expected, due to the drop-offs and pick-ups each driver has to accommodate along their route.

Joseph is part of a small group of Access-a-Ride users in the first phase of an MTA pilot program that allows them to use a ride-sharing app to hail a wheelchair-accessible taxi anytime, on demand—and still pay the same base fare they’d pay on a traditional Access-a-Ride trip.

“I go out more often. I'm out and about, and I take care of things I need to take care of instead of having somebody do it for me,” said Joseph. “I have more freedom.”

But the pilot is only available to 1,200 people right now, less than 1 percent of all Access-a-Ride users. The MTA said it intends to expand the pilot to a second phase, but hasn’t provided more details. 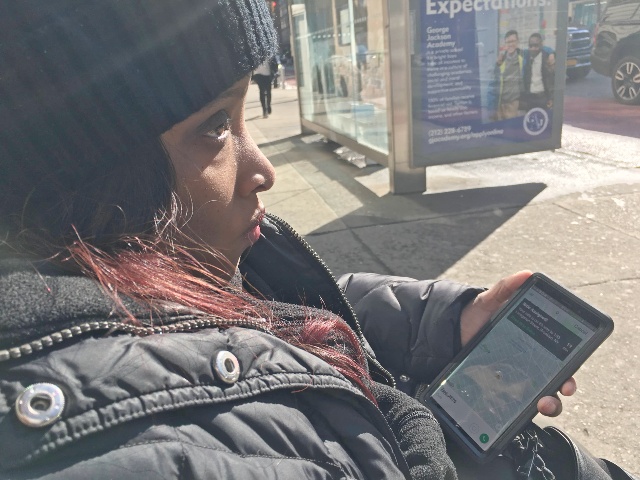 As for the payment system, it’s as primitive as it gets: exact change, bills and coins, every time. Access-a-Ride isn’t compatible with MetroCards, so commuters with disabilities miss out on the discounts others get with weekly or monthly cards.

And now, all MTA riders face a likely fare increase. In their February 27th meeting, MTA board members are expected to vote on a proposed increase in the base fare from $2.75 to $3 per trip. An alternative proposal would keep the base fare at $2.75, but eliminate the 5% bonus on pay-per-ride cards.

And for disability rights advocates this raises particular concerns. Increasing the single-ride price for people who don’t have equal access to the full mass-transit system seems unfair. And New Yorkers with disabilities are more likely to be living on a fixed income, which means any fare increase poses a financial hardship.

Some have proposed a different, lower base fare for paratransit users. This divides the community, many of whom have fought all their lives to be treated equally.

Alex Elegudin, who was hired by the MTA last summer to serve as its first-ever Accessibility Chief, told Gothamist/WNYC he’d prefer a solution that keeps the base fare the same for everyone.

“In terms of favorable treatment or other kinds of things of that nature, it’s not always what the community is looking for,” he said. He is in a wheelchair and uses Access-a-Ride too.

“Just because we travel by walkers, wheelchairs, canes...it doesn’t mean that we need to be treated differently,” Joseph explained, adding she thought the fare should stay at $2.75 for all riders.

But Ruth Lowenkron, the director of the Disability Justice program at New York Lawyers for the Public Interest (NYLPI), said framing it as an “equality” argument left out an important consideration: Access-a-Ride users would experience a 9.1 percent fare increase per ride, while most MetroCard-using commuters would only see hikes of around 4 percent because of available discounts.

Lowenkron said she's sympathetic to the MTA’s budgeting concerns but a major reason New York City has to provide costly paratransit options to so many people is because much of the transit system is inaccessible.

The MTA is currently involved in multiple lawsuits involving subway accessibility. Elegudin declined to comment on them, but acknowledged that expanding accessibility was a big part of the MTA’s “Fast Forward” plan. He also said it’s worth considering accessibility projects when weighing the pros and cons of a blanket fare hike.

“I have many, many personal friends with disabilities that say, ‘We get it. We're okay to pay more as long as that money is helping the system become more accessible,’” he said.

Here’s the thing: raising the fares doesn’t necessarily mean more money for big projects like station accessibility. That’s budgeted separately. So it’s not as simple as saying the extra quarter per fare will go toward more elevators.

The MTA said it’s working on a new fare payment system that will level the playing field for all riders. The new “contactless card” system would allow users to tap a card every time they ride, which will draw from their own transit-related account. Elegudin said this would give Access-a-Ride users access to the same discounts as other riders.

The new fare system is coming to certain 4/5/6 subway stations and some bus lines on Staten Island as early as May, but the full roll-out of contactless cards is expected to take a few more years.