Agreement on $700 Billion Bailout Plan, But Congress Needs to Pass It 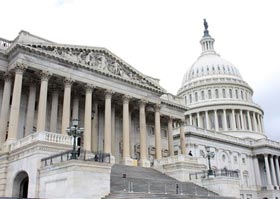 Congressional leaders and the White House agree on a bailout plan that will aid troubled financial firms, but now it must be passed by Congress. The Wall Street Journal reports the bill, which would "effectively nationalize an array of mortgages and securities backed by them -- instruments whose deteriorating value has clogged the nation's financial system," was finished late yesterday, and Speaker of the House Nancy Pelosi says it's "frozen"--as in no more changes.

Here's a NY Times graphic with an overview of the bill's details (the program is run by the Treasury secretary, but in consultation with the Fed, SEC, HUD, and Federal Home Finance Agency; "steep tax consequences" for some executives making more than $500,000). Dealbreaker liveblogged the Treasury Department call: "Some guy from Treasury says he wants people to focus on legislation, not implementation. One of his colleagues says he thinks that's a 'very good idea.'"

President Bush hopes that Congress will pass the bill quickly, "A vote for this bill is a vote to prevent economic damage to you and your community...We will make clear that the United States i serious about restoring stability and confidence in our system." He even referred to the plan's expense, saying "much if not all of the tax dollars will be paid back." Read Bush's full statement here.

However, it's expected to be a tough vote and Asian and European stock markets were/are jittery. CNBC reports that central banks overseas "continued to pump cash into the system to try to persuade fearful financiers to lend to each other."