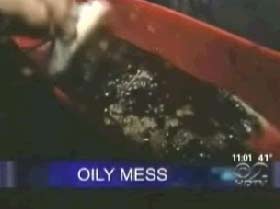 Yesterday morning, surfers contacted the Coast Guard about "tar-like balls of oil washing up" on the shoreline of Lido Beach, near Jones Beach on Long Island. The surfers said they also had oil on their wet suits.

The spill seems to be about 3000 feet wide and 1500 feet long. Now the Coast Guard, working with other local, state and federal agencies, are trying to figure out where the spill is coming from as they also work to stop the spread and start clean up. The NYS DEP told WCBS 2 that they should have the oil cleaned up by Monday; still, the video looked pretty gross.

Newsday reports the Coast Guard is collecting oil samples from vessels who entered and left the New York Harbor at the time of the estimated pollution (CSI: Coast Guard?). Petty Officer Annie Berlin said, "We still don't know the source of the oil. It could be a ship offshore dumping the oil or a ship with a leak."