As different as Brooklyn and Queens are in the public mind, the border between the two boroughs is barely noticed by most New Yorkers. The only major city border not marked by a waterway—both Brooklyn and Queens are, geographically and geologically, part of Long Island—it evolved organically starting in the seventeenth century, when the British crown first established Queens and Kings Counties as separate bureaucratic jurisdictions. At one point, the Kings County town of Bushwick and the Queens County town of Newtown engaged in a decades-long dispute over just where the border lay, until the issue was resolved by the designation of a small boulder dubbed Arbitration Rock as the boundary.

Bushwick’s western border, initially, was the East River, where the community known as Bushwick Shore grew up in the early 1800s. In 1840, the former Bushwick Shore seceded from its namesake parent and renamed itself the town of Williamsburgh, after Colonel Jonathan Williams, the Army Corps of Engineers chief whom a local developer had hired to survey the land for development. The new town’s independence didn’t last long: Fifteen years later, both Williamsburg (the "h" had been dropped in the intervening decade) and Bushwick were annexed by Brooklyn, then still an independent city. 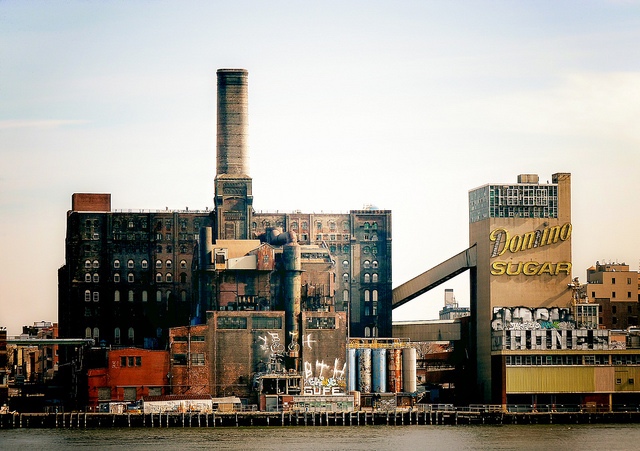 From its early days, Williamsburg was a mishmash of a neighborhood. Tenements and other small apartment buildings shared streets with light industry; its defining feature for many years was the sickly sweet smell emanating from the Domino Sugar factory on the East River waterfront. By the middle of the 20th century, Williamsburg’s mostly German and Jewish population had given way to a melting pot of Puerto Ricans, Dominicans, Italians, and Hasidic Jews. Then, starting in the 1980s, the neighborhood began to draw a different kind of migrant: artists and musicians fleeing the high rents that were quickly making unaffordable the Lower East Side. The derelict factories and warehouses of Williamsburg may have been unsightly to some, but they offered dirt-cheap rents and the ability to blast music at all hours without worrying about waking the neighbors. By the mid-2000s, Kent Avenue along the waterfront was home to homegrown clubs like Death By Audio and Glasslands, and the heart of New York’s new music scene had relocated to Brooklyn.

As Williamsburg became a hip address, landlords began to notice, raising rents and tearing down old buildings to put up new ones. Rents soared and soon young college graduates seeking a place to lay their futons began turning their gaze to what was formerly known as the East Williamsburg Industrial Park, a square mile of warehouses, breweries, and factories on the Williamsburg-Bushwick border that had been gradually emptying out as light industry exited the city. A few landowners, seeing the housing boom underway immediately to the west in Williamsburg proper, began clearing out old buildings and offering them as "lofts" to young artists and musicians who cared more about space, cheap rent and easy access to Manhattan than about having any neighbors or local shopping.

"We didn’t know anybody who was living out here, and we didn’t know anything to do out here," recalled Jesse Jarnow, a musician and journalist who after graduating from college in 2001 moved back to the Brooklyn that his parents had abandoned, settling on Bushwick in large part because of its easy accessibility to more known quantities like Williamsburg and Manhattan. "This was the home base from which we went to go do things. The idea was it was cheap and available and we could make noise. It was a way we could extend our adolescence, probably." Shortly after he and several friends moved into a former factory building in the industrial park, they took the freight elevator down to the first floor. "It was as if the factory had been closed, and people had just said ‘go home,’" he recalled. "There was literally still food in the fridge and on some of the tables—it was actually a good sign that there weren’t rats in the building." 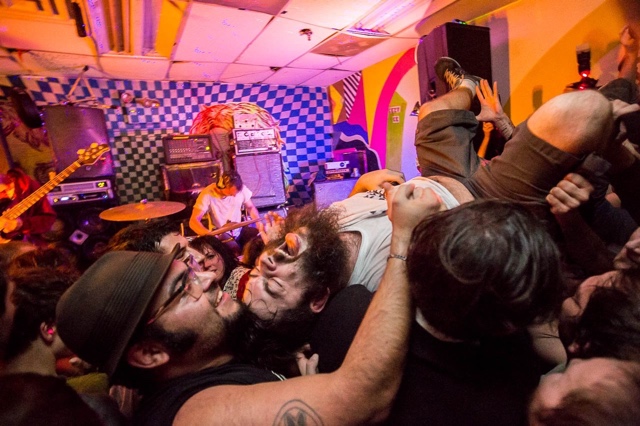 With lots of empty—if not exactly finished—available space, young musicians frustrated with the difficult-to-break-into club scene began setting up recording studios and DIY performance spaces ("DIY" in this case being code for "not actually licensed by the city"), and often added living spaces for themselves as well. The owner-occupants of Shea Stadium—"not the original Shea Stadium, obviously," noted Jarnow—installed bathrooms and other amenities, and lived upstairs from the club. Soon, the Williamsburg-Bushwick border had a burgeoning art scene of its own, with not just musicians but young activists and artists who saw the largely abandoned properties as a blank slate in which to create a new community. Huge graffiti murals began to appear on long-unused roll gates. "One day there was some dog poop and someone painted it gold," recalled Jarnow. "That was one of my favorites."

Because the industrial park had never been residential, the new loft dwellers weren’t directly displacing any existing residents with their new music spaces and shops. Soon enough, though, realtors seeking new frontiers noticed the success of the new neighborhood on the Bushwick border and began setting their sights farther east. Listings began to pop up for properties well into Bushwick, advertised as East Williamsburg (or even "Far East Williamsburg") and touting their proximity by subway to Manhattan.

Among the earliest Williamsburg refugees to venture past the industrial park, across Flushing Avenue and into the vicinity of Bushwick proper, were the members of the experimental band Skeletons. Having been evicted from their warehouse building at 184 Kent Avenue on the Williamsburg waterfront in 2004, the band started looking on Craigslist for "raw, industrial live/work spaces that were along the L train," as Skeletons founder Matt Mehlan later recalled. They ended up on Wyckoff Avenue in Ridgewood, just across the Queens border from Bushwick. (Prior to the blackout, the two neighborhoods had even shared a zip code, until Ridgewood residents petitioned the post office to be distinguished from Bushwick’s now-sullied 11237). In Ridgewood, the band founded Silent Barn, pouring sweat equity and sheetrock into an old warehouse to create a performance/residential/work space that soon housed both hip bands and a video game designers’ collective in the basement.

Taking the L train, which makes 12 stops across Williamsburg and the heart of Bushwick, and riding it until you arrived at the first affordable apartment listing became a common tale told by new young residents, most of whom were, unusually for Bushwick, white. "In 2000, we started getting hints of people from Williamsburg trickling into the community—a lot of young professionals, a lot of artists," said Jose Lopez, an organizer with the community group Make the Road New York. It was "something completely foreign to community members in Bushwick," said Lopez. Previously, he said, "people were scared to step into Bushwick." 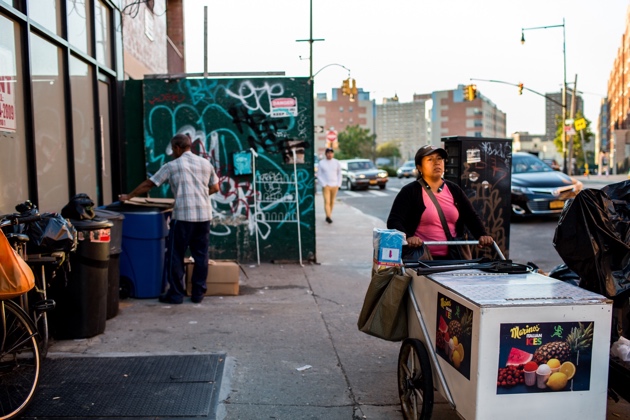 The migration was accelerated after the city moved to rezone Williamsburg in 2005, ostensibly to protect that neighborhood from developers who were aggressively plotting to erect buildings as tall as possible to cash in on its new popularity. The final Williamsburg zoning map limited high-rises to the largely industrial waterfront; developers promptly moved to take advantage of the new rules while simultaneously rushing to beat the clock on the old ones, erecting new condo towers on the waterfront, plus a swarm of hastily constructed apartment buildings wherever they could break ground inland before the new zoning went into effect. (One tower on North 7th Street, derisively nicknamed the "finger building" by neighbors, got in under the gun to rise 200 feet tall, more than triple the height of its neighbors; the resulting building offered apartments listing for anywhere from $640,000 for a one-bedroom to nearly $2 million for a three-bedroom.)

The new housing brought with it new residents willing to pay more for pricier amenities. It was the rezoning, in fact, that first drove Mehlan and his housemates to first move to Ridgewood and launch Silent Barn: after six months in a warehouse building on the Williamsburg waterfront, explained Mehlan, they had been kicked out of their cheap loft space, along with their neighbors, to prepare for its conversion to "authentic loft rentals."

It was around this time that Bushwick first began to see not just new residents in old buildings, but new construction as well. For Lopez, this was brought home when 358 Grove Street went up on the next block over from Make the Road’s headquarters. A 13-story tower moated by parking lots, the building’s opening was advertised to prospective residents—or mocked; no one could be quite sure whether it was too dumb to be real or too dumb to be a joke—via a bizarre YouTube music video. In it, a blonde woman in sunglasses, identified as Daphne B, looked out over Bushwick from her rooftop perch and reminisced in song about her ostensible Manhattan past: "the memory of us/sitting in Washington Square on summer nights." The video’s final shot showed Daphne skipping down the sidewalk, framed by a Puerto Rican flag and the tenements that the 358 Grove apartments looked down on. "These hopes, hopeless jokes all rest on you," she sang. "In Bushwick, I hope, someday."

#bushwick
#bushwick wars
#original
Do you know the scoop? Comment below or Send us a Tip