After Surge In Cyclist Deaths, De Blasio Vows To 'Jolt The Situation'

by Jake Offenhartz and Gwynne Hogan

Mayor Bill de Blasio pledged on Monday to launch a "major enforcement action" targeted at reckless drivers, following the third cyclist death on city streets in the span of a week.

Speaking to NY1's Errol Louis from the campaign trail in Illinois, the mayor seemed to admit for the first time that the recent spike in cyclist fatalities—at least 14 this year—constituted a "crisis" worthy of intervention. He said the Department of Transportation will now be tasked with formulating a new safety plan for cyclists, and has ordered the NYPD to "aggressively clear out bike lanes" in the meantime.

"What we've seen in these last few weeks and months is not acceptable," de Blasio charged. "We're going to use the power of NYPD enforcement on motorists to try and immediately jolt the situation."

The comments came hours after Devra Freelander, a 28-year-old cyclist who worked as a sculptor and artist in Brooklyn, was struck and killed by the driver of a cement truck. She is the tenth cyclist to be killed in the borough this year—equaling the total number of cyclists killed citywide in 2018.

Later that evening, dozens of cyclists and activists gathered in Brownsville, where 57-year-old cyclist Ernest Askew was killed by a driver last week, to demand more bike lanes in low-income neighborhoods.

We are heartbroken by the death of artist Devra Freelander.

Devra was a 2017 Artist Fellows and her work, 'Fluorescent Sunrise,' inspired thousands of Park visitors.

Our deepest condolences go out to her family, friends, and all who loved this talented and luminous individual. pic.twitter.com/JYApLHbpuf

While short on specifics, the mayor's vow to reassess his street safety strategy is a noteworthy break from his previous rhetoric on Vision Zero. As recently as last week he insisted that the initiative was working as planned, despite a nearly 20 percent increase in overall traffic fatalities this year and failures to meet safe infrastructure targets last year (the city aimed to add nearly 30 miles of new protected bike lanes in 2018; they ended up building about half of that).

De Blasio has also voiced support for drivers who park in bike lanes, and defended the NYPD's practice of ticketing cyclists after cyclist deaths.

In Freelander's case, she was riding on Bushwick Avenue when she was struck, along a heavily-trafficked corridor that connects to the new (frequently blocked) protected bike lane on Grand Street. The busy corridor does not have any safe cycling infrastructure of its own. Security camera video of the crash shows her traveling northbound on a sidewalk and entering the intersection at Boerum Street, where she's struck by the 70-year-old cement truck driver, who appears to have a green light.

Cyclists in the area immediately noted that Bushwick Avenue is not only snarled with heavy truck traffic, but has long been impeded by chunks of cement left on the side of the road where cyclists would normally ride.

"Every time I come up this street I hold my breath," Mike Pach, a bike messenger who lives in the area, told Gothamist. "You're running over this rough road, you're thinking…some knucklehead is going to clip me while I'm trying to avoid these obstacles." 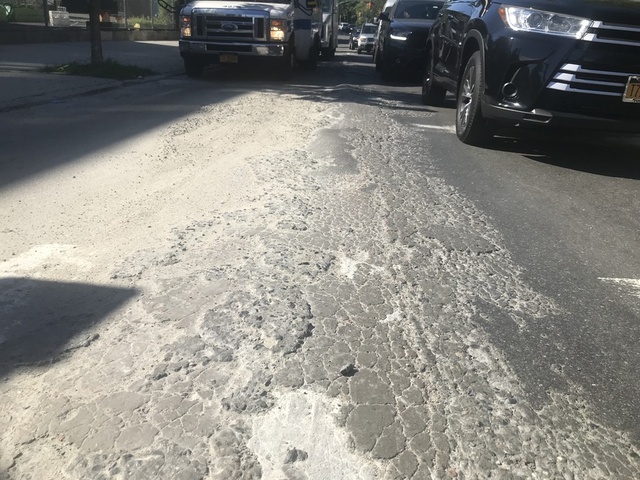 One of several patches of discarded cement along Bushwick Avenue, steps from where Freelander was killed (Gothamist)

Without bike lanes in the area, Pach added, "you're running the risk of people taking measures that they think are going to ensure their safety, and it ends up costing their lives."

The owners of the truck that killed Freelander, meanwhile, have blamed the death on the popularity of cycling. On Tuesday, fleet manager Danny Mastronardi told Gothamist, "There are a lot of cyclists that are all over the place. It makes everybody’s job harder. Not just us—cars, trucks, taxis, everybody."

A day after a driver operating a United Transit Mix concrete truck struck & killed someone bicycling in East Williamsburg, this United Transit Mix driver has their truck in the 1 Av “Protected” #BikeNYC lane at 14 St.#VisionZero is a joke & a disgrace in this town. pic.twitter.com/7oWdv9VRC5

As the DOT considers its new plan for cyclists, those who ride in the city say that helpful solutions are already on the table. Legislation introduced over a year ago in the City Council would target repeat reckless drivers, and Speaker Corey Johnson has proposed a comprehensive safe streets plan that would add 250 miles of protected bike lanes to the city in five years.

De Blasio has yet to voice support for either bill. Asked on Monday, a spokesperson for the Mayor's Office said he was still reviewing the legislation.

Before heading to Iowa later this afternoon, de Blasio appeared on WPIX earlier today to discuss his redoubled efforts to protect cyclists and pedestrians.

"I'm looking for a plan to speed up and intensify everything we're doing," he said. "Again, five years ago we thought things were moving in the right direction. This crisis proves we've got to do it more quickly."

Listen to Gothamist reporter Jake Offenhartz discuss this story below

#bikenyc
#cyclist
#devra freelander
#mayor de blasio
#vision zero
#we the commuters
#original
Do you know the scoop? Comment below or Send us a Tip