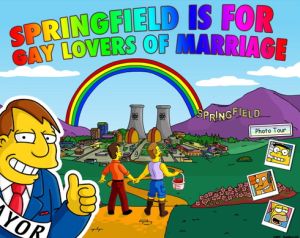 Two lawsuits currently wending their way through New York courts are forcing judges to grapple with the legal ramifications of “gay divorce.”

In one case, State Supreme Court Justice Laura Drager is allowing a Manhattan woman to sue for divorce and custody of children borne by a woman she married in Canada in 2004. The ruling echoes a recent appellate court decision in Rochester that found "out-of-state marriages of same-sex couples must be legally recognized in New York" since out-of-state heterosexual marriage are recognized.

A second case involves Halina Avery, 39-year-old heir to the Fortune 500 office products firm, and her former partner, 37-year-old real estate agent Molly Caldwell. The pair lived together since 1994 but broke up in 2006 after Caldwell admitted kissing another woman in a bar. Avery soon sued Caldwell to remove her from a life insurance policy and evict her from the co-op they shared. Now, according to the Daily News, Caldwell is demanding an equitable distribution of the money she used to share “with the woman she called her wife.”

Lawyers for Avery contend their client made provisions for her former partner - and that the two signed what was a prenup of sorts. Caldwell is trying to apply the terms of marriage to the relationship when, legally, they don't apply, Avery's camp contends.

"They never entered into, nor intended to enter into, a marriage," said Yetta Kurland, a lawyer for Avery. "If they had intended to marry, or file as domestic partners in New York City, then they would have done so."

Caldwell says Avery “cut her off at the waist” and insists the case be handled just like a divorce. Avery’s lawyers point to their “1995 living-together agreement, which states neither woman would make a claim for support, money or property in case of a breakup.” A ruling is expected soon and could set a major precedent for what qualifies as a legally binding same-sex domestic partnership.