After Peeing on Hippies, Jersey City Pol Goes on Wagon 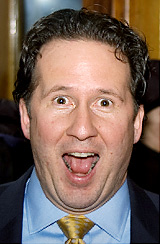 After allegedly urinating off the balcony onto concertgoers at a Grateful Dead tribute band show Friday night, Jersey City Councilman Steven Lipski (pictured) was arrested—not hailed as a hero—and charged with assault. Now he's come forward to announce that he's quitting drinking, although he still insists it wasn't a golden shower of unlimited devotion but simply an accidentally spilled beer. Employees at the D.C. club disagree and maintain they spotted Lipski in the act of micturition and called the cops.

While the sudden notoriety must be embarrassing for Lipski (though, really, not much more embarrassing than having people know you go to Grateful Dead tribute shows), some good has come out of the incident in the form of priceless hippie outrage on the Dark Star Orchestra message board. (For the uninitiated, the Dark Star Orchestra, or DSO, plays complete sets of Grateful Dead concerts.) The flame war starts with a message from band member Rob Eaton, who writes: "Your [sic] a Fuck Stick! You might just as well have pissed on the band in my opinion. Your a disgrace to the community and should be ashamed of your self. The irony is it's someone on this board who is a frequent poster and claims to be a fan of the band."

While Lipski is a well-known member of the DSO community, he may not be for much longer. Some message board commenters are calling for him to be banned—and not just from the DSO forum but from all future DOS concerts! Other forum members are urging fans to "keep the scene clean people," while "Waynecs" is choosing to accentuate the positive: "Glad I had tix for Govt Mule Friday night." After the jump, a strident defense of Lipski that climaxes with the best citation of Grateful Dead lyric we've seen since our High School yearbook.

"I am totally apalled [sic] at this incident! Not the incident on Friday but at the negative hateful responses from this community. I can understand strong emotions about this and will not hold onto resentment toward anybody involved. I know Steve and from my experience he is a good hearted, kind, generous man. If anybody has the courage to look at their own lives I am sure they will recollect times that they are regretful, that at times they have done or said things that cannot be undone. Personally I have lived for many years on the far outreaches of society's norm and have done a great many much harm. There are things done that I have no idea occured but must believe it because people have said it is true. I believe Steve did not wake up that day and say "what a great day to pee on people". People had great disgust for me for many years and did not want me around until I got the help I needed. I have since then learned a new way to live and for many years now have been an asset to many people. If all the embarrasment, pain and regret I have lived helps me be effective in helping another, it was worth it. Let's all give positive vibes that this may be Steves experience!

And if a man among you got no sin upon his hand
Let him cast a stone at me for playing in the band."