In less than two weeks, more than 1100 people had reacted to the post. The top comment said, "Agh I hate these emails. They're so impersonal. They address nothing. I'm sad again."

These events, the latest in a series of suicides and student deaths that have galvanized successive universities into enacting reforms, have revealed deeper issues in Columbia's mental health practices. The past year's tragedies—since September there have been seven deaths, at least four of which have been suicides—have rocked the university community and brought longtime grievances regarding the state of counseling and psychological services on campus to the surface.

"It was like an onslaught," said Juliana Kaplan, a sophomore at Barnard, remembering the student reaction in January, when students were notified about three deaths in one week.

That month, Jacqueline Basulto, a senior at Columbia College, wrote a Change.org petition calling on the university and 18 other highly selective universities to improve mental health services. By early March, it had more than 850 signatures, and dozens of supporters had posted their own stories of mental health challenges at the university.

One student wrote, "Being a freshman here and seeing a close friend forced to go on medical leave from the stress and lack of mental health help on campus, having a student on the floor below commit suicide, and hearing all around me about people being crushed by anxiety and depression here has been disappointing. Columbia, do something."

"What I'm hearing is that students are alarmed, and I'm personally alarmed," said Sean Ryan, a senior who serves as the co-chair of the Student Affairs Committee on the University Senate, a policymaking body composed of students, faculty, and administrators.

According to a survey that he and his fellow co-chair, Grace Kelley, presented to the Senate's plenary session on February 3rd, at least two dozen students have taken their lives since 2000. Of the total number, almost 80 percent were undergraduates, and 15 (62.5 percent) were students of color.

This problem is not unique to Columbia. In 2014 (the most recent year for which the Centers for Disease Control and Prevention provide data), suicide was the second-leading cause of death among 15 to 24-year-olds. A 2016 study from the Center for Collegiate Mental Health at Pennsylvania State University found that among college students seen by campus mental health counselors, the number who have seriously considered attempting suicide has increased every year since 2010, reaching 33.2 percent in the 2015-2016 school year. In the same report, over nine percent of respondents said they had made a suicide attempt.

Over the past two decades, a number of universities have witnessed suicide clusters, defined by the CDC as suicides or suicide attempts "that occur closer together in time and space than would normally be expected." In the 2003-2004 school year, five students committed suicide at NYU; in 2010-2011, there were six suicides at Cornell. Similar suicide clusters occurred at the University of Pennsylvania in 2013-2014 and at Tulane University and Appalachian State in 2014-2015.

Victor Schwartz, the chief medical officer of the Jed Foundation, a nonprofit that works to promote mental health and prevent suicide among teens and young adults, cautioned that such clusters may give a misleading appearance of high suicide rates on a campus. "College appears to be protective in some ways," he said, pointing out that young adults enrolled in universities show lower suicide rates than their un-enrolled peers. 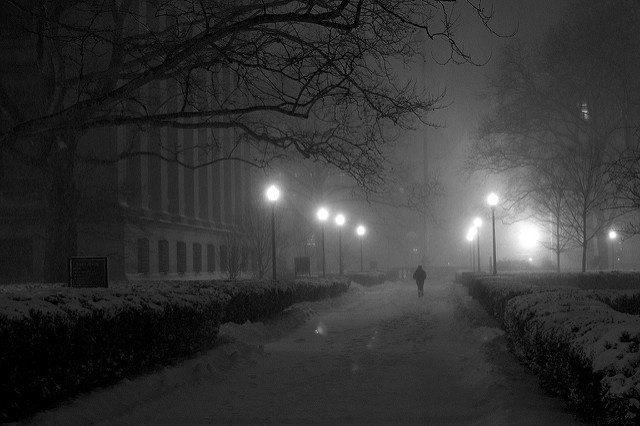 However, Schwartz noted that at universities, the large numbers of students living in close proximity poses a greater risk of suicide contagion, the process through which individuals exposed to suicides or suicidal behavior in others may be led to exhibit that behavior themselves. "The extent to which people in a community identified with a person who [died by] suicide might be a risk," he said.

Doreen Marshall, the vice president of programs at the American Foundation for Suicide Prevention, explained that mental health conditions like depression can contribute to suicide risk, and college is "often the first time that a student has to manage that on their own."

Community, family, and peer connectedness and support can substantially affect suicide risk. When students arrive at universities to live away from their families and hometowns, such support can diminish. Marshall added that individuals who are isolated or experience other "barriers to help-seeking" are among those most at risk.

International students, often far removed from their social safety nets, may be particularly vulnerable. "Some of the things that do contribute to suicide risk we do see in our international population, and sometimes those are more pronounced," Marshall said.

A recent article in the Columbia Spectator identified social isolation and stress as two of the principal factors contributing to the university's mental health problems. The lack of on-campus spaces for gathering, as well as what students say is confusing and inefficient access to psychological help, only exacerbates these problems.

Basulto, the author of the Change.org petition, said that when she was feeling suicidal she called the school's mental health hotline and after four days received a call from Columbia's Counseling and Psychological Services. She explained her situation to the operator and learned that she would have to wait two weeks for an appointment. The therapist with whom she finally met told her that she could only schedule a follow-up for her acute symptoms another two weeks later.

But, she adds, "I felt lucky." She had a support network in New York: her family lived in the city, and as a senior and a member of a sorority, she had a strong social support network. Furthermore, she was able to afford $350-per-session fee for off-campus care, a luxury not available to many students.

Some of the students who recently took their own lives may not have had the benefit of such networks. One of them, Yi-Chia "Mia" Chen, was an exchange student from Waseda University in Japan. In December, Mounia Abousaid, a senior from Morocco, was found in her dorm room several days after passing away; police classified her death as a suicide. Another student, Taylor Wallace, was a freshman. "Where are these kids on our campus? Are they living with anyone?" his mother told Spectator. "Taylor didn't have a roommate. Taylor didn't do a lot with his floor group." 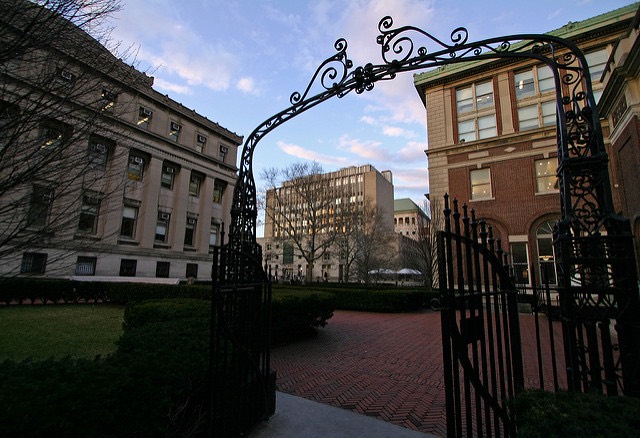 For Sidney Perkins, a vice president of the student council for the School of Engineering and Applied Sciences, the flaws in Columbia's current approach to mental health became clear during a conversation with a friend who attended the Icahn School of Medicine at Mount Sinai. After a student passed away last summer, the school canceled classes, held several mandatory assemblies, and hosted breakout sessions. "It struck me how obvious these suggestions were," Perkins said. Compared to Mount Sinai's response, the Columbia administration's approach to student deaths, with its emails, uninterrupted class schedule, and smaller-scale counseling responses, seemed lacking.

The day before the Senate meeting where Ryan and Kelley presented, Suzanne Goldberg, the executive vice president for university life, published a six-page public letter responding to the student deaths and announcing a series of new initiatives, including a "mental health week," expanded access to mental health services, and further resources for student spaces, groups, and on-campus social events.

Columbia declined to provide Gothamist with specifics about how much money the school would be investing in these initiatives.

Goldberg also announced an advisory group of students, faculty, and staff to continue the effort. In an email 11 days later, Columbia College Dean James Valentini announced that staff would receive required training for "gatekeepers"—individuals who can help identify students who may need support.

"We have been reexamining the practices and resources in place for identifying students in need and connecting them with the extensive counseling, support groups and other services available at Columbia," a Columbia College spokesperson stated.

But Ryan remains skeptical. "From our perspective," he said, the Office of University Life's initial proposal "really doesn't go far enough." The resources and grants Goldberg mentioned would only partly achieve the changes he hoped the school would make.

Most critically, he says, counseling is too hard to access for students in crisis. Columbia's Counseling and Psychological Services complements its sizable clinical staff with a hotline for urgent mental health crises that connects students with triage specialists who offer recommendations for care.

But as Basulto's story illustrates, it can take multiple steps to reach professional counseling. At times, there are delays. Other services, like the late-night mental health hotline Nightline, are operated by undergraduates rather than clinicians; Barnard College runs separate counseling services, but they are closed on weekends.

Ryan believes that administrators need to help lead a broader cultural shift away from overwhelming academic stress and student isolation through more university-supported social events, continuous engagement with mental health programming, and straightforward, efficient avenues to counseling and psychological help. The problem is not that counseling is unavailable, he thinks, but rather that the "triage system" fails to quickly and easily connect students who need help with professionals who can provide it.

In a statement to Gothamist, a Columbia University spokesperson expressed confidence in Columbia's triage system. "This system is based on best practices, to assess the student's concerns, understand their clinician preferences, and determine the priority with which they need to be seen. Students in distress are prioritized for care," the spokesperson stated.

Perkins coauthored an addendum to the memorandum from the Engineering Student Council proposing a range of community-building and gatekeeper-training initiatives, as well as improved academic advising to help students manage their workloads.

Many of these proposals resemble peer institutions' responses to on-campus suicides. Fom 2004 to 2011, NYU increased its mental health staff from 25 to 40 clinicians and quadrupled the hours of its walk-in clinic. The school also began offering low-cost psychiatric care to students and instituted mental health first-aid training for staff in places like the financial aid and registrar's offices. It also created a centralized hotline system.

In the wake of the University of Pennsylvania's cluster of suicides in 2013 and 2014, the university instituted similar changes based on recommendations from a task force. New policies focused on improved communication about mental health services, resources, and training offered to community members. 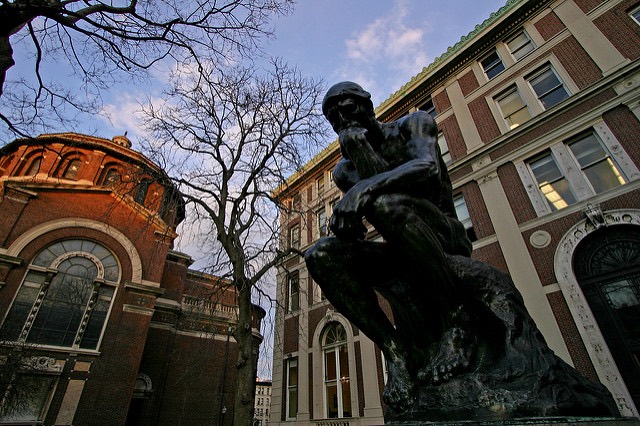 The Jed Foundation's Schwartz, who served as a consultant for the task force, said that many of these measures were successful at expanding access to counseling. Indeed, after adding four clinicians, the school reduced average wait times for appointments from 21.6 days in December 2013 to 8.5 days one year later. In December 2014, it created a 24-hour hotline, and its counseling services moved to a new, larger location. Last spring, the task force reconvened after another student suicide.

But at Columbia, despite the administration's press releases and the new initiatives, many students remain unsatisfied. Kaplan said that there's a sense that "there hasn't been an organized, publicized response."

Kaplan, like many of the students Gothamist spoke to, said she doesn't think the administration is indifferent to the tragedies that have taken place this year, but she feels much of the burden has fallen upon students themselves. And her classmates remain deeply concerned about the situation on campus. "It's at the point where a lot of people are saying, myself included, that this is an epidemic," she said. "And that's terrifying."

#columbia university
#mental health
#suicide
#longform
#original
Do you know the scoop? Comment below or Send us a Tip
A new Gothamist is coming! We’ve moved comments over to our beta site. Click here to join the conversation and get a preview of our new website.