After Mets Win, Willie Randolph (and others) Fired 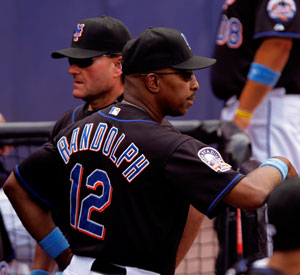 The rumors swirled viciously before the game. Willie Randolph was safe for at least the week, but some of his coaches would be fired shortly. Randolph and some of the coaches were about to be axed. There were even erroneous reports that Rick Peterson had been fired.

The Mets scored two quick runs in the first thanks to a Jose Reyes walk and a Carlos Beltran homer and made it 4-1 after 2. But, the Angels battled back to cut the lead to 4-3 with two runs in the fourth. The Mets added four in the seventh and then the Angels added three of their own. But that was it as the Mets’ bullpen did its job and New York escaped with a 9-6 victory and their third victory in four games.

And, things seemed fine until the Mets got back to the team hotel. It was there that Omar Minaya delivered the news that Willie Randolph, Tom Nieto and Rick Peterson were all fired. The fact that Minaya chose this particular time (3am EDT!) and place to make this move certainly makes it seem like he was trying to bury the story, but Willie and his coaches certainly deserved better than this. Perhaps we will get some answers when Omar speaks at 5pm today. Bench coach Jerry Manuel takes over as the interim manager for a team with a $138 million payroll that is 34-35.