After Loss, Giants Look to Rebound Against 49ers 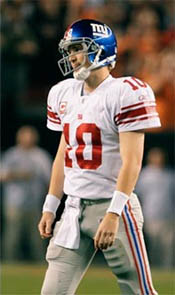 The Giants spent this past week thinking about missed opportunities. They blew a winnable game in Cleveland and blew the chance to open a huge lead in the NFC East. After tomorrow’s game, the Giants play their last 10 games against very good football teams, so getting another win this week is vital.

And the Giants should be plenty motivated for this matchup. You can bet that Tom Coughlin spent the week letting his team have it and they certainly deserved every minute of abuse they received. Yes, the Giants will certainly miss Antonio Pierce if he doesn’t play (quad injury), but they should have enough defense to handle an inconsistent 49ers offense.

On offense the question is will Eli Manning’s injury lead to another sloppy game? Eli isn’t listed on the official injury report and the guess here is that the Giants will just keep running the ball against the San Francisco defense if there is any doubt about Manning’s health. An angry team coming home to face a 2-4 team shouldn’t be much of a game. Of course the Giants proved last week that they can play down to the level of their competition. That won’t happen again, New York will win big.

#Antonio Pierce
#Eli Manning
#football
#giants
#sports
Do you know the scoop? Comment below or Send us a Tip