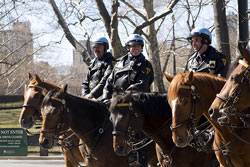 A pair of lawsuits from injured anti-war protesters have caused the NYPD to re-think its pro-active policing policies when it comes to crowd control. The suits, brought against the City by the New York Civil Liberties Union, ended in a settlement that included an agreement that cops would be a little more lenient with protesters.

The Sun reports police will now "advise mounted police officers to warn people to disperse before using horses to break up crowds." The suit had specifically pointed out incidents where protesters had avenues of escape blocked by police barricades and where people--including a woman in a wheelchair--were trampled by mounted cops.

An NYPD spokesperson said that verbal changes would be elaborated to established crowd control procedures. The settlement also ensured protesters would be provided avenues of escape and/or retreat when asked to disperse as well as the ability to leave and re-enter protest areas. NYCLU executive director Donna Lieberman said, "The right to protest without police interference is central to our democratic society, and this settlement is an important step towards assuring the NYPD will not be an obstacle to peaceful protest."

#horses
#lawsuits
#manhattan
#nyc
#nyclu
#protests anti-war
#settlement
#trampled
Do you know the scoop? Comment below or Send us a Tip