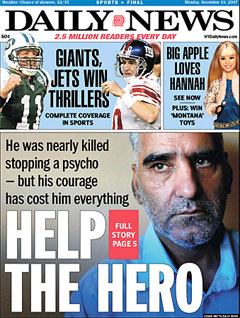 Today, the Daily News put Amarjit Singh on its cover and asks New Yorkers to help him. Who is Singh? He was the cook at the Texas Smokehouse BBQ in Murray Hill until October 6, when a mentally ill man, Lee Coleman, stormed into the kitchen and grabbed four knives. Singh tried to stop Coleman, but Coleman slashed him in the head before heading outside to repeatedly stab pedestrian Susan Barron. Coleman only stopped when an off-duty transit cop shot him.

Singh had chased Coleman onto Second Avenue and even brought out towels for Barron in spite of his injuries, and at the time, News columnist Michael Daly said the "city should be proud" of Singh. Now Singh tells the News how the incident has left him traumatized and jobless. The Texas Smokehouse BBQ has been closed since the incident, and while he "used to make $700 a week and sent about $1,500 a month to his four children in India," they now "rely on relatives."

Singh lost feeling on the left side of his face, lost hearing in his left ear (which the Daily News says "was nearly cut off"), and suffers from flashbacks and nightmares. He's also unable to walk very far without needing to rest and is "too scared to return to his rental apartment, just blocks from where he was attacked, so he now sleeps on the sofa in a friend's living room in Queens."

Singh's medical expenses paid by the NY State Crime Victims Board, but he told the News, "A lot of relatives are helping [my children], but how long they help? Not a long time. Now I'm living for free, but I cannot stay here always... People always say 'hero' but what is a hero? It means nothing."