In a move that would completely change how commercial trash is collected and removed from 100,000 businesses in New York City, the Department of Sanitation has issued a plan to create 20 commercial waste zones across the five boroughs that will limit the number of carting companies that can operate in a given area.

Each zone will allow for three to five carting companies, which the Sanitation Department says would result in 18 million miles of truck traffic taken off city streets every year, and reduce the pollution from waste truck traffic by 63%.

While the de Blasio administration's plan to create zones has been in the works since 2017, a ProPublica series helped to galvanize public anger against the status quo.

"The city’s current commercial waste carting system has proven itself to be inefficient, unsafe and unsustainable," said Sanitation Commissioner Kathryn Garcia on Tuesday. "The Commercial Waste Zones plan is a comprehensive blueprint to create a safe and efficient collection system for commercial waste that provides high quality, low cost service while advancing our zero waste goals. It is a plan that will lead to a fairer, safer, more sustainable New York City."

The plan will be implemented over the next five years: First an environmental review would take place until summer of 2019, followed by an RFP process for carting companies between 2020 and 2021. Customers will be being transitioned into the zones between 2021 and 2023.

Here's how many trucks are currently serving New York City, as well as what would happened with 20 zones: 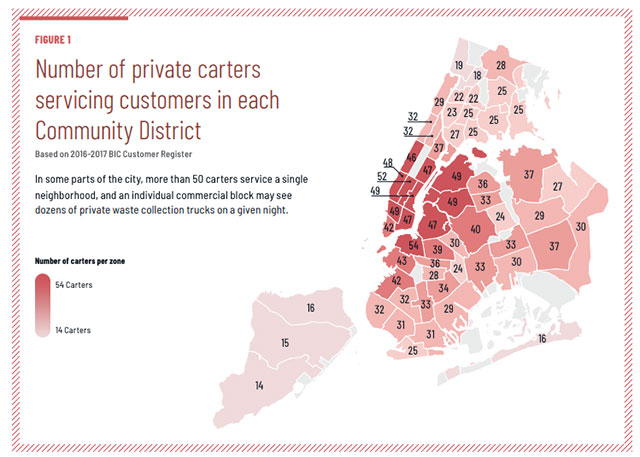 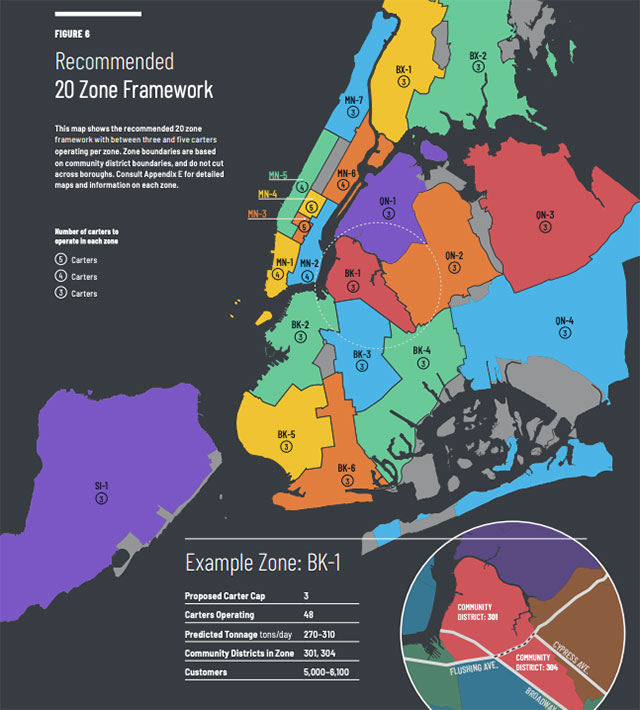 Here's how truck traffic would be reduced: 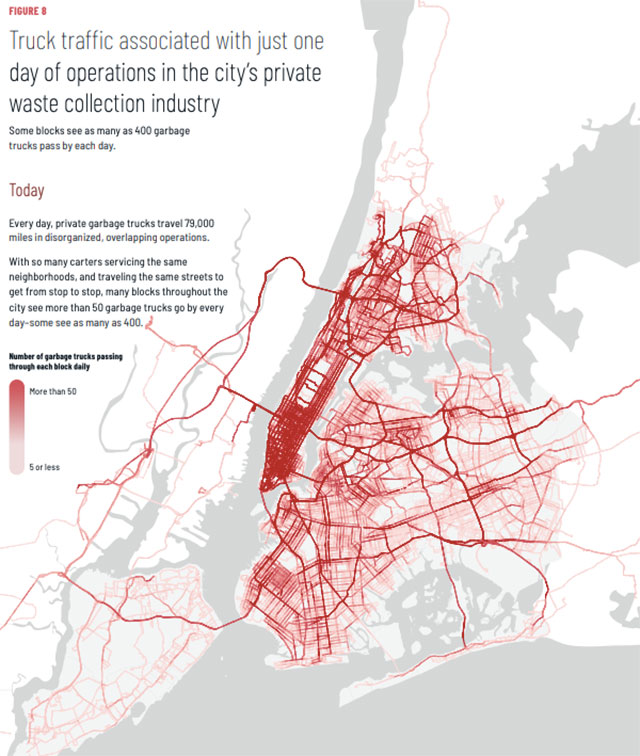 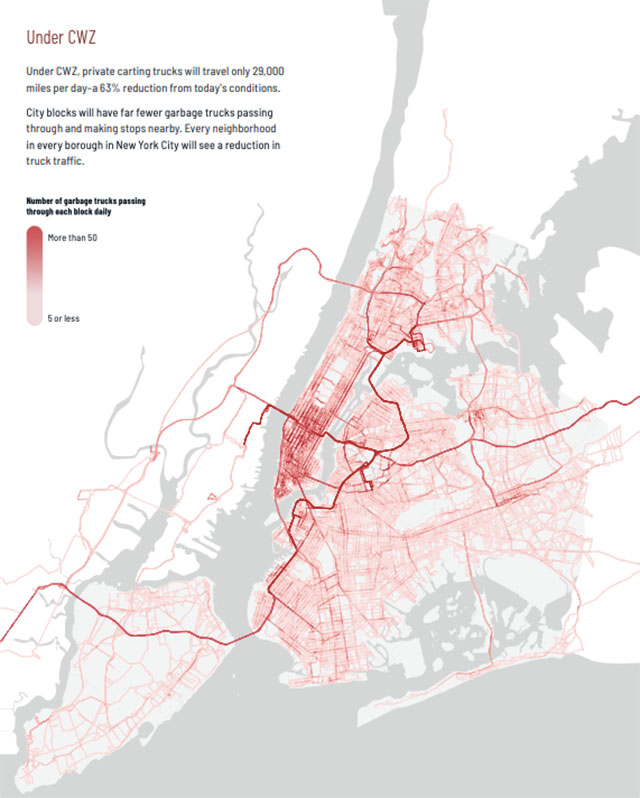 City Council Member Antonio Reynoso, who has been critical of the industry, welcomed the announcement.

"For years commercial carting companies have torn through our City’s streets with little regard for the safety of the public, or their workers. Drivers have to work up to 16 hours to complete routes that can have hundreds of stops in a single shift, forcing them to disobey traffic laws in order to finish by the end of the night. Workers are often given no safety training or equipment, and wage theft is rampant."

He added, "This is particularly troubling considering that many of our City’s most vulnerable residents work in this industry. Commercial carting is considered a second chance employment opportunity, particularly for formerly incarcerated black and brown men. However, rather than offering a chance to help folks land on their feet, carters exploit these vulnerable individuals who have few other options. Commercial waste zoning will raise labor standards by mandating rigorous safety protocols and providing City oversight of companies servicing these zones."

A coalition of groups supporting changes to the commercial trash industry, Transform Don’t Trash NYC, thinks the plan is a good first step. "More needs to be done... To get the maximum benefit from the policy, and use this rare opportunity to holistically reform a broken system, the City must limit one carter to each waste zone, hold them to aggressive recycling and waste reduction goals, set high minimum wages, and increase standards for waste export. This is our opportunity to deeply transform this industry by improving conditions for workers and for the communities of color living near waste transfer stations and they should not be left with half measures."

On the other hand, the National Supermarket Association, Bodega Association and NYS Restaurant Association are not very happy, as they claim the plan will cost business owners across the board (they cite Los Angeles' new commercial waste program as proof). “Mayor de Blasio’s commercial waste zone plan is bad for bodegas and, over the long term, the higher prices under a zoned system would very likely put many of these hardworking store owners out of business,” said Ignacio Castillo, president of the Bodega Association of the United States. “New Yorkers who support their local bodegas need to stand up and speak out against the mayor’s terrible plan for zoned waste collection.”

And Kevin Dugan, government affairs director of the NYS Restaurant Association, said, "It’s already difficult and costly to operate a quality restaurant in New York City - and Mayor de Blasio’s plan for commercial waste zones would make it harder than ever to stay in busines. Restaurant owners have a right to expect that the city can address issues regarding the commercial waste industry without creating such serious and unnecessary problems for the businesses it serves every night."

Those groups support a proposal from Council Member Robert Cornegy that would give the Business Integrity Commission, which regulates the carting industry, the power to address concerns without a zoned system.

You can see the whole DSNY plan here.