After Cop Tasers Him, Naked Man Falls to Death 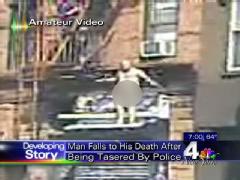 A naked man standing on a fire escape and, later, a storefont, fell to his death after a police officer stunned him with a Taser. Based on video (below) and witness reports, Iman Morales, 35, was wielding a fluorescent light bulbs at cops who tried to get close.

According to the Post, Morales was yelling from the fire escape at 491 Tompkins Avenue in Bedford-Stuyvesant. When police asked him to come down, he "climbed down to a ledge above a metal roll-down storefront cover" and starting waving the long light bulb. The Daily News reports a witness as saying, "When the police came, he was screaming, 'You're gonna kill me and I'm gonna take everyone with me. I'm gonna die and you're gonna die with me.'"

After he continued to ignore the police order, one officer fired his stun gun, apparently per orders from his boss. WNBC reports a witness saw Morales freeze and fall "on his head on the sidewalk." Another witness told the NY Times, "It was a dead man's fall." The Post also has a distressing gallery of images showing Morales outside the building, being Tasered, falling and on the ground.

Morales was taken to Kings County Hospital, where he later died. He had rented an apartment on the third floor of the building. His mother had called 911, finding him "out of control" (she believed he stopped taking his medication). When police went to his apartment, the Daily News reports he "crept nude onto the fire escape and tried to enter a neighbor's fourth-floor window when police forced their way into his apartment." That neighbor said, "He tried to get into my window. He banged. He said, 'Let me in! Let me in!' But no way I'm letting a naked man into my apartment." Another witness said that his mother had been yelling, "No! No! Don't hurt him! He's sick."

The NYPD is investigating the incident; this past summer, the NYPD started to arm police officers with Tasers, as a way to avoid shootings. The Times notes, "Community activists held a news conference after Mr. Morales’s death, urging neighbors not to prejudge the police and urging the authorities to fully investigate." However, City Councilman Peter Vallone did say, “My first take is that while I’m sure there are no experts out there on how to handle a crazy naked man with a weapon on top of a ledge, I’m also sure this wasn’t the right way."