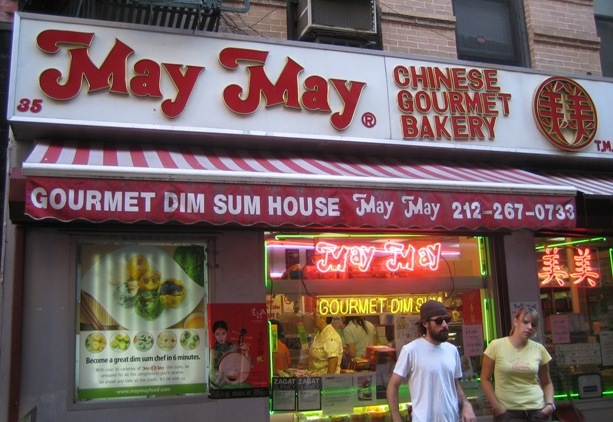 On Monday, the NY Times reported about Chinatown mainstay May May Bakery's end-of-the-month closing. To those who flocked to the Pell Street bakery for the prepared dumplings, shu mai, zongzi ("Chinese tamales"), roast pork buns, and many other items (much, if not all, made at its Long Island City warehouse), it's an upsetting prospect.

The bakery is run by three brothers whose father opened the store in 1965. The Times explained the closing, which oddly enough is not due to rent issues or lack of customers:

The Hung brothers are closing the company because they are tired, and their five children — who include a lawyer, a pharmacist and a teacher — are unwilling to put in the 11-hour days in steaming kitchens and on the factory floor.

“Our second generation is fully educated, so they don’t want to work as hard as their uncles and their father,” said John Hung, 55, the youngest of the brothers. “This is one thing we most regret. We don’t have the young generation to take over.”

After five years of deliberating whether to sell the business, the brothers — John, Alex and Bill — decided they could not find a buyer who could continue to assure the same quality. “I can sell at a good price, but if they ruin the name, that’s something we don’t want,” John Hung said.

It's a sad but understandable phenomenon. We just wonder if the ambitions of second generation children of all cultures - and the first generation's hopes for them - could spell the end of other types of businesses as well. We just wish that the factory would stay open - when we went to May May to stock up on our favorite, Shanghai vegetable buns, we were sad to see that many products were simply not being made anymore.