After Butchering Cousin's Wife And Children, Murder Suspect Said, 'I Know I Am Done'

The man accused of killing his cousin's wife and four young children appeared in court yesterday. Mingdong Chen, 25, did not say anything when he was charged with one count of first-degree murder, four counts of second-degree murder and various other counts of assault and criminal possession of a weapon. His lawyer pointed to his forehead, noting that he had "good-size bruises that I believe happened while he was in custody." 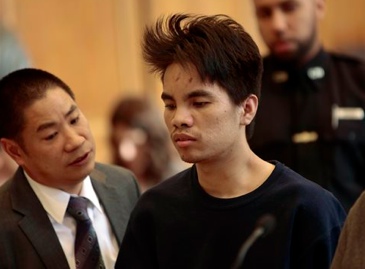 Chen was recently unemployed and had been staying with them. His behavior on Saturday concerned Li enough to call her husband but she couldn't reach him (Zhuo works as a cook in Queens six days a week and would "go home one day a week to be with his family"), so she called her mother-in-law in China. The mother-in-law, who also couldn't reach her son, called her daughter who went to the Sunset Park apartment to check on them—and found Chen bloody.

According to the criminal complaint, Chen said, "I know I am done." The police say that he made remarks about being jealous that others around him were doing better, but his motive is still unclear. However, a friend of Chen's suggested that his mood could have been prompted by a romantic situation gone wrong. From the Post:

He also may have been still stewing over being duped by a thieving Chinatown girlfriend, according to neighborhood gambling buddy Erdong Chen, no relation.

“A friend introduced him to the girlfriend a few years ago for the purpose of marriage,” said Erdong Chen, 37, and Mingdong claimed he paid a $70,000 dowry to her family. “We can save $30,000 a year by working every day,’’ Erdong noted. But the girl ran off with the dough, Erdong Chen said.

“My girlfriend, I can’t believe she left with my money. I want to kill her,” Mingdong seethed, according to Erdong — who said he last saw Mingdong on Friday. “He didn’t seem good in the head, agitated,” Erdong said.

The friend added that Zhuo wasn't happy with his cousin's smoking and gambling; others have said that Li wanted to kick Chen out of the apartment.

The NY Times reports that PS 105, which three of the children attended, has been trying to explain the situation to the other students:

“It is with great sadness that I must inform you that three of our students have passed away,” wrote Johanna Castronovo, the school principal, in a letter to parents on Monday, in English and Chinese. “In school, our staff members are working already with the children to provide them with information and to help them express the pain and sadness they might be experiencing.”

In a fourth-grade classroom where Linda would have been on Monday, classmates gathered to create a memory wall dedicated to the little girl. “It’s a big wall, and then we write the things that Linda did to us,” explained a 9-year-old classmate. The students brainstormed together, and then plastered messages across one large area, she said.

Another classmate said of Linda, "She lent me pencils when I needed them. She was so generous and shared everything."

#awful
#brooklyn
#killing
#mingdong chen
#murder
#rampage
#stabbing spree
#sunset park
Do you know the scoop? Comment below or Send us a Tip