After a shooting Saturday night at Brownsville’s 56th annual Old Timers Day celebration left one dead and 11 others injured, some local elected officials are calling for more city funding for community-based anti-violence programs and cautioning that a greater police presence is not the answer.

“If police could solve the problem, it would be solved already,” Public Advocate Jumaane Williams said during a speech at a rally and march in Brownsville on Monday evening that was organized by the newly formed Brownsville Rapid Response Coalition. The coalition includes community-based anti-violence groups and local elected officials as well as city agencies and the NYPD.

According to NYPD Commissioner James O’Neill, more than 100 police officers were on hand Saturday at the concert that closed out the days-long Old Timers festival, which draws people who grew up in Brownsville back to the neighborhood each year.

In an interview at Monday’s rally, Brooklyn Borough President Eric Adams said the city should not resort to the same kind of amped-up police presence at future Old Timers Day events that it has deployed in response to violence at J’Ourvet, another beloved annual Brooklyn festival.

“That kind of manpower is not the trick,” said the retired NYPD captain. “I think instead of having 100 police [at Old Timers Day], lets have 100 members from S.O.S. and Man Up!.” 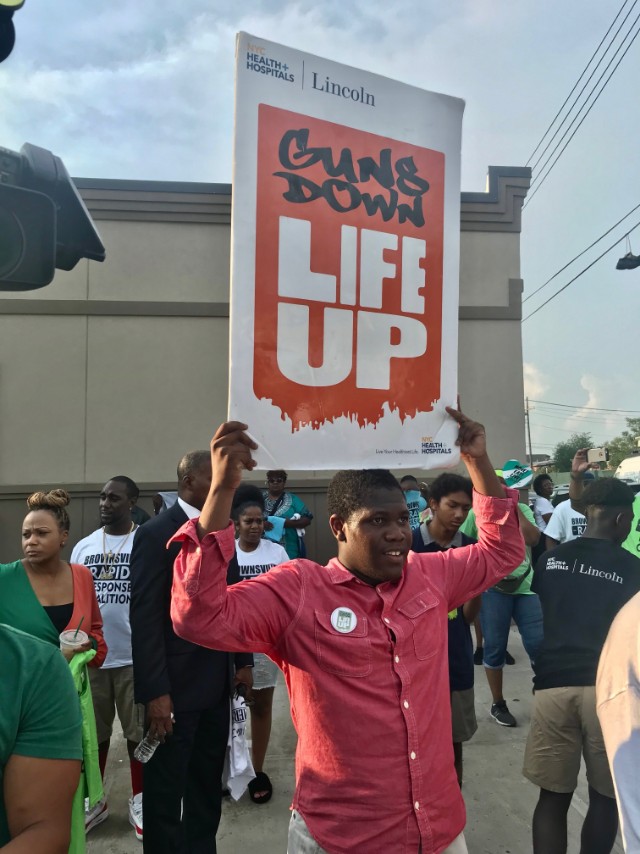 Christian Matthew, a 14-year-old youth ambassador with the anti-violence group Guns Down Life Up, lives in the Bronx but came to the rally Monday to show solidarity with Brownsville, as did others from other parts of the city. (Caroline Lewis / Gothamist)

Save Our Streets (S.O.S.) and Man Up!, which intervene to reduce violence in high-crime areas using tactics like conflict mediation and peer mentorship, were among about a dozen anti-violence organizations represented at Monday’s gathering, which convened outside the Brownsville Recreation Center, where the shooting took place. The rally proceeded up Hegeman Avenue with chants like “Brownsville in, violence out!” and “Never ran, never will: Brownsville!”

Adams said the $36 million or so the city invests in its Cure Violence programs, which take a public health approach to gun violence and have been shown to reduce gun injuries, is not enough, and leaves some known “hotspots” without violence interrupter programs.

City Councilwoman Inez Barron is among those who echoed this sentiment, saying in her speech at the rally, “The people who formed this coalition are the people who are here everyday doing the work and their funding needs to be expanded.”

Elected officials also renewed the call for the bloody incident to be labeled a mass shooting, so it could be met with the same outpouring of support and resources that other mass shootings across the country have received. It’s a designation Mayor Bill de Blasio, who traveled to Michigan on Tuesday to campaign for president, has hesitated to use, saying the phrase is “usually reserved for a different type of situation than what I know this to be so far.”

The NYPD said Monday it’s looking for two or more suspects in the shooting and said 38-year-old Jason Pagan, the man who was fatally shot, was a member of the Bloods. 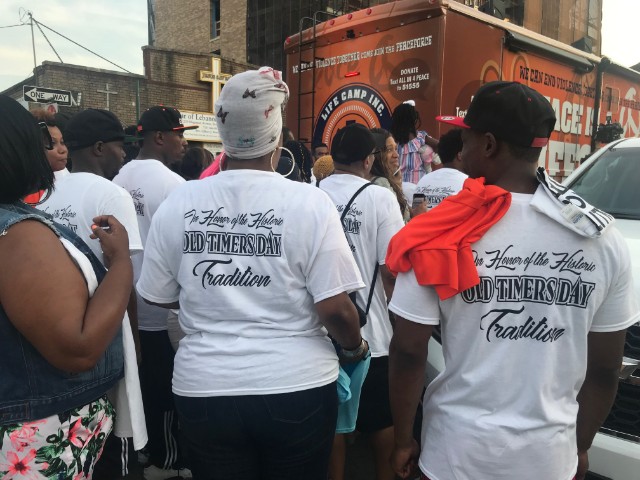 Some in attendance at the rally speculated that whoever committed the crime wasn’t from the neighborhood. But regardless of who was responsible, people said they should be treated as trauma victims, and not allow anyone to normalize violence in Brownsville.

“This ain’t what we about out here,” said Eric Smith, 51, who has lived in Brownsville his whole life and said he attends Old Timers Day events each year to reconnect with old friends who have left the neighborhood. “This is the first time anything like this has happened.

Saturday’s shooting took place just moments after a band played the last song of the night, “Family Reunion,” by the O’Jays, and many sang along, said Councilmember Alicka Ampry-Samuel, who was leaving when shots rang out and said she was left traumatized by the event.

“I talked to family and friends and they said, ‘This is not your first shootout,’” Ampry-Samuel told the crowd Monday evening. “And I said, ‘Yes, but it’s my first shootout after Old Timers Day with 12 people lying on the ground.’”

#brownsville
#old timers day
Do you know the scoop? Comment below or Send us a Tip