After Brief Occupation By Gracie Mansion, Adorable Seal Swims Away

The adorable harbor seal spotted on East River rocks near Gracie Mansion may have left, but the cute creature will forever occupy a place in our hearts. One woman who was walking her dog told the Post, “I saw him and for the first 30 seconds, I was just kind of frozen, thinking how cute he is."

Yesterday, after hearing a report about a seal sighting behind Gracie Mansion, we asked the Mayor's office—via Twitter—if they could send us a picture, if in fact there was a seal. The Mayor's office complied, tweeting a picture of the sunbathing seal. Rocker Ted Leo got into the act, suggesting, "Brutally evict it! // RT @NYCMayorsOffice: Meet the new City seal! MT @Gothamist seal on rocks behind gracie mansion" 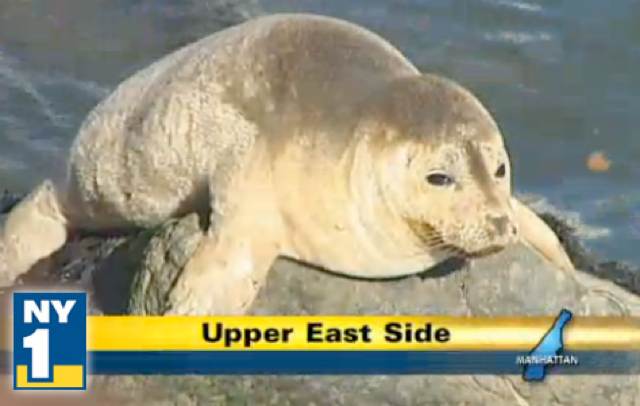 The Riverhead Foundation said the seal seemed healthy and the estimated the one-year-old left after two hours. While seals are familiar sights on the Hudson River (example 1, example 2), a park ranger told NY1 he hasn't seen one in the East River before, "It looks healthy and you know, just out exploring, enjoying the sun today."

Oh, and if you were wondering why the seal surfaced at the East River, the seal answered that question on Twitter (handle "Not A Floater"): "Why the East River? C'mon! It's easy schlepping to Russ & Daughters and Acme Smoked fish. Have you seen me get around on land?"

#cute
#east river
#gracie mansion
#harbor seal
#seal
#ted leo
#twitter
Do you know the scoop? Comment below or Send us a Tip