After A Mellow Day In The Park, Protests Heat Up Wednesday Night At DNC

Protests were few and far between during much of the day on Wednesday outside the Democratic National Convention.

As Democrats brought out big names to stump for presidential nominee Hillary Clinton, including President Barack Obama and Vice President Joe Biden, throughout most of the afternoon only small groups of demonstrators gathered in Roosevelt Park, the designated “free speech zone,” with other smaller gatherings happening near City Hall.

A handful of people, including some very brave senior citizens, were arrested earlier in the morning for scaling one of the large black iron barricades surrounding the Wells Fargo Center. During the demonstration, law enforcement pepper sprayed several protesters.

After the morning fracas however, much of the day was quiet, with small groups of demonstrators milling around various parts of Roosevelt Park, where some had been camping since Sunday.

Standing amid a few dozen tents, Anthony Rovoedo, who has been staying in the park since Monday, said he came to the convention from New York because the system is flawed. “Our electoral system is flawed and the primary election was a fraud, so we gotta come out here to show people that perhaps we can create a better system where we don't need to fall into the trap of losing our votes or them getting lost or not being counted,” said Rovoedo. 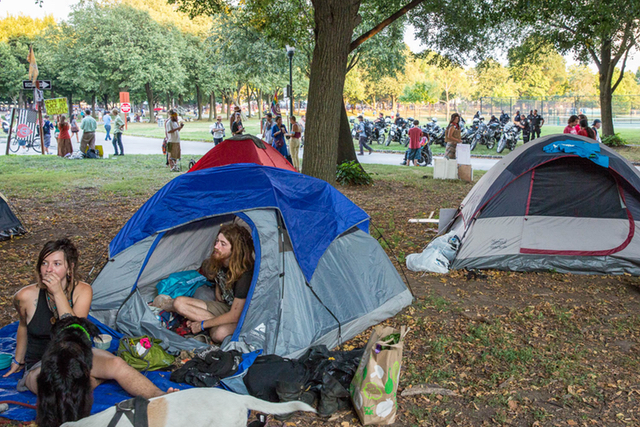 While technically demonstrators are prohibited from camping in the park, officials for the most part have let the small settlement of tents stand without much interference. Police have kept an eye on them throughout the week, and the local fire department has provided water, a cooling station, and toilets for those who have been staying there.

“This is a 'half illegal' occupation of the park," Rovoedo told us, "and since I'm protesting I'd rather stay with the people who are showing their activism by not obeying the rules of the park.”

Near the small tent village, reminiscent of encampments made by activists during the height of the Occupy Wall Street movement, some built a makeshift kitchen where food was served to anyone hungry. Stirring a pot on a small hotplate, a man named Elliot said he came to the park to keep people happy with full stomachs.

“We knew this was going on so we wanted to come here and feed people. We started off with a hydration station, just giving coffee, tea and water. People started bringing in food so we started cooking all the time. We're keeping people happy by keeping them full.” 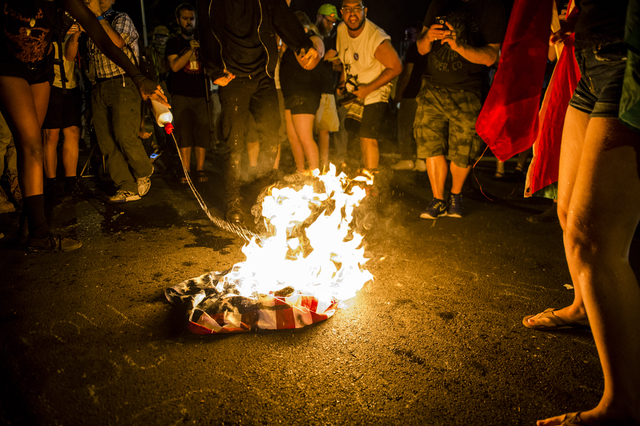 As night fell and more protesters descended on the gates near the AT&T subway station, which has mostly been closed to anyone without the proper credentials, protests intensified quickly, culminating in another flag burning.

One group managed to make their way to a parking lot inside the security zone and staged a sit-in. More than two dozen managed to make it inside and were issued citations.

Meanwhile at the gates, several protesters attempted to make their way inside, rushing an open section. Police, who for the most part have exercised extreme calm in dealing with demonstrators, pushed back, shoving some with their batons. Seven people were arrested for entering a restricted area, a Federal crime. One demonstrator briefly caught fire when trying to stomp out a burning flag in the street.

Protesters broke through #DNCinPHL security perimeter and were rushed by police who attacked crowd #DemsInPhilly pic.twitter.com/Piz8Q0KeRj