After 55 Days, Jets Earn a Win 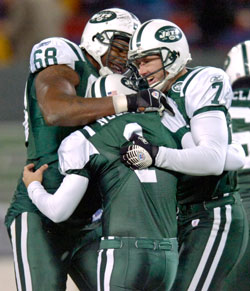 Bye weeks can do wonders for football teams. Time off certainly helped the Jets. They held their own against the Pittsburgh Steelers and then secured a 19-16 win in overtime after trailing by three with two minutes, 23 seconds to go in regulation. For the second straight game, Kellen Clemens engineered a game-tying drive capped by a Mike Nugent field goal -- although this drive probably should won the game. The Jets finished the job in extra session when Nugent came through again.

Clemens' game was underwhelming, but it came against the NFL's best defense. Thomas Jones gave his team 117 yards on 30 carries -- also no small feat -- and the Jets kept Willie Parker (52 yards on 21 carries) under wraps. Credit Eric Mangini's game plan and the Jets' execution for all of those successes. His bunch also should be proud of coming back after blowing their 13-7 halftime lead. Even if it costs them a better draft pick, the Jets aren't going to roll over and die.

But Mangini's clock management almost cost the Jets in the fourth quarter. With 37 seconds to go and a first-and-goal on the Steelers' five-yard line, Mangini had Clemens spike the ball. That cost the Jets a shot at the end zone, a mistake that loomed large after they drew a delay-of-game penalty and two passes fell incomplete in the end zone. Mangini should have realized that 37 seconds is more than enough time to run three plays, and that the team should want to score with almost no time remaining. Instead, he sacrificed first down for no reason. If this game had turned like most others this season, most people wouldn't be smiling.