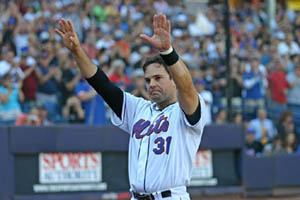 He may not be on a team this season, but Mike Piazza, the greatest offensive catcher in the history of baseball, announced his retirement today. Drafted by the Los Angeles Dodgers in the 1988 amateur draft, Piazza spent time with the Dodgers, Marlins, Padres, A's and eight seasons with the New York Mets. The 39-year-old Piazza retired with a .308 career average, 427 home runs and 1,335 RBIs.

In a statement released through his agent Dan Lozano, Piazza thanked all those that helped with his career, including several members of the Mets organization (owner Fred Wilpon, former GM Steve Phillips, John Franco, Al Leiter, managers Bobby Valentine, Art Howe, and Willie Randolph -- the list is long) which he played for from 1998-2005. Piazza saved his final thanks to the fans, especially those in New York:

But I have to say that my time with the Mets wouldn’t have been the same without the greatest fans in the world. One of the hardest moments of my career, was walking off the field at Shea Stadium and saying goodbye. My relationship with you made my time in New York the happiest of my career and for that, I will always be grateful.

In addition to Piazza's full statement, the Daily News found a fan video from his final day with the Mets.

Despite his deficiencies behind the plate, Piazza was a 12-time All-Star that made the National League team 10 seasons in a row starting in 1993. Five years from now, expect a bust of Piazza in Cooperstown.

#baseball
#mets
#mike piazza
#retirement
#sports
Do you know the scoop? Comment below or Send us a Tip