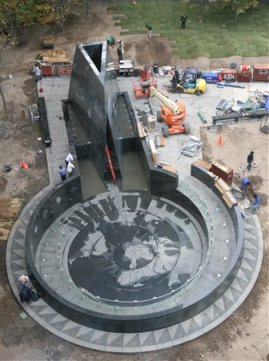 A memorial to thousands of people buried in downtown Manhattan will open to the public Friday at 1 p.m., and there will be a candlelight procession at 8 p.m. from Battery Park to the monument at Duane and Elk Sts. The African Burial Ground National Monument is set to open 16 years after construction workers discovered human remains while doing foundation work on a downtown federal building.

What they discovered were the remains of early black residents of Manhattan––some free, most slaves––who were buried in what was known as the Negro Burial Ground in the 17th and 18th centuries. The actual burial ground spread over 6.6 acres of downtown Manhattan and approximately 15,000 to 20,000 people were buried there. The African Burial Ground National Monument will occupy the southwest corner lot of Duane and Elk Streets, two blocks north of City Hall.

The New York Times describes the memorial itself:

Rodney Léon, 38, a Brooklyn-born architect with the firm Aarris Architects of Manhattan, designed the monument, whose granite slabs rise in acute angles to enclose visitors in the hull-like Ancestral Chamber. An opening in the chamber, straddled by two reflecting pools, leads to a sunken circular court, where voices echo off of walls inscribed with symbols and scriptures.

Down a spiraling ramp is the Ancestral Libation Court, the centerpiece. A map of the world, centered on West Africa, is carved into the floor in gray and black granite, along with the archaeological notations made from the 1991 findings.

President Bush declared the site a national monument in 2006 and the federal government paid $5 million for the installation of the memorial. While a competition for the design of the memorial was announced in 1993, finalists weren't chosen for the actual design selection until 2002. Critics complained that very little community participation was allowed in the procedure (the public comment period showed the five finalists on display in a corner of one of the rooms at the Jacob Javits Convention Center that one of the building's workers described as remote) and some complained about the selected design.