It has been nearly 9 months since real estate developer Serge Hoyda, armed with attorneys, a construction crew, and a private security detail entered the Children's Magical Garden on the Lower East Side and began erecting a fence to bisect the property. On Monday, community activists filed a lawsuit on behalf of the Garden in the New York Supreme Court seeking to be declared the lawful owners of the property, have the fence removed, the developer permanently barred from the premises and an unspecified amount of punitive and compensatory damages.

Children's Magical Garden's advocates are seeking a judgement from the court proclaiming them the lawful owners by adverse possession, under which, to quote their press release, "a party gains title when it takes exclusive possession of the premises under claim of right for a ten year period." In other words, the space has been used as a garden for 10 years, so they contend they are the lawful owners of the property. It was turned into a garden 1983, after decades of alleged neglect, during which time the lot was frequented by drug dealers.

The damages sought are in regard to the fence-building situation that unfolded dramatically last year, with the NYPD called to the scene after community members tried to prevent the construction crew from entering the garden. The plaintiffs claim that the developer and his associates forced their way onto the premises; tramped, destroyed, and dug up "the Garden's cultivations and improvements"; and have continued their trespassing "that, to this day, [has prevented] the children and gardeners from accessing its property." 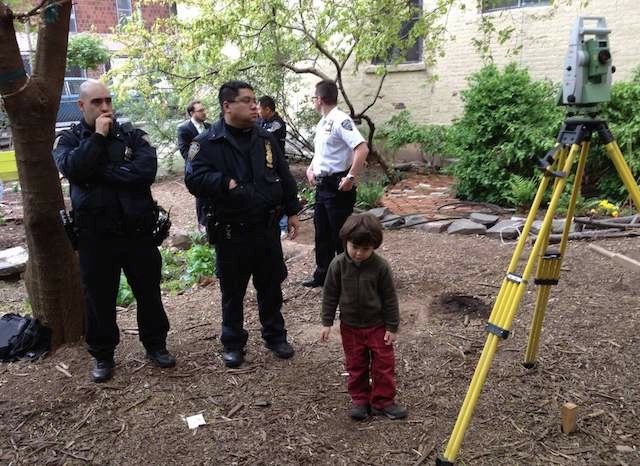 DNAinfo reports that the "Garden members are also suing the lot's new owner, 157 LLC, which is connected to developer Horizon Group and bought the space in January. 157 LLC has already filed permits with the city's Department of Buildings to construct a six-story building on the garden site."

The Garden is across the street from the P.S. 20 elementary school, where it provides a space for, among other things, afterschool and summer programs, hands-on gardening experience, and poetry readings. When we pressed the attorney for the developer last year for a comment on the fence installation, he told us, "The park is a safety issue. It's obvious."

We have reached out to Hoyda for a comment and will update if we hear back.

#capitalism
#children's magical garden
#community garden
#development
#LES
Do you know the scoop? Comment below or Send us a Tip