Advocates fear that new state legislation intended to "fight the deadly criminal behavior of gangs throughout New York" will further criminalize young men and women of color in NYC regardless of whether it becomes law.

The Criminal Street Gang Enforcement and Prevention Act, which passed the Senate this week by a vote of 48-13, creates new felonies for alleged gang affiliation in direct response to a recent string of homicides in Long Island that investigators have linked to the transnational gang MS-13. And while Assembly Speaker Carl Heastie has voiced opposition, some of the bill's critics predict it will embolden the NYPD's guilt-by-association approach to gang policing regardless.

"They are using this big, feared, transnational gang to try to create fear and hysteria around something that is going to impact New Yorkers," said Josmar Trujillo, an advocate with the Coalition to End Broken Windows and vocal critic of NYPD gang raids. "MS-13 is the boogeyman they can use to put [charges] on the 15-year-old black guy in the Bronx."

While prosecutors focus their attention on MS-13, which is concentrated on Long Island and has attracted the attention of Attorney General Jeff Sessions, data suggests that gang-related crime is minimal in NYC. Between 2005 and 2012, the NYPD designated less than one percent of all crime as "gang-motivated," according to NYPD data acquired by CUNY Law Professor Babe Howell. Mayor de Blasio has recently praised the NYPD for record-low crime rates.

MS-13 activity has been reported in NYC, as well. Three Queens men, two of whom are alleged MS-13 members, were arrested Wednesday and charged with assault and attempted murder for a 2016 shooting that left an alleged rival paralyzed.

"Sociologists call it moral panic," Howell told Gothamist. "Essentially you are opening up a world where law enforcement will apply for and get money, target these groups, and be able to enhance public support by creating this 'we are going after the worst of the worst' mentality."

The Senate bill, sponsored by Republican Brooklyn Senator Marty Golden, would define criminal street gangs in the penal code for the first time, as "an association in fact of two or more individuals identified by a common name, sign, dress, symbols, tattoos, or other mark or markings." It would also add new felonies to the penal code—including for participating in gang activity and recruiting a person to join a gang—and lengthen sentences for certain misdemeanors and felonies if the person is deemed complicit in gang activity.

Legal Aid Society attorney Anthony Posada told Gothamist that he fears the legislation could result in harsher sentencing for broadly-defined charges that, in his experience, are applied generously to young men of color based largely on social media monitoring.

"This will just build on what we feel is a big problem, which is that hundreds get charged with conspiracy to commit murder or other violent crimes, absent allegations or direct involvement," Posada said. "Social media accounts are followed and tracked. If I am an alleged gang member and someone follows me on my page, that person can be an associate of mine simply because they befriend me." 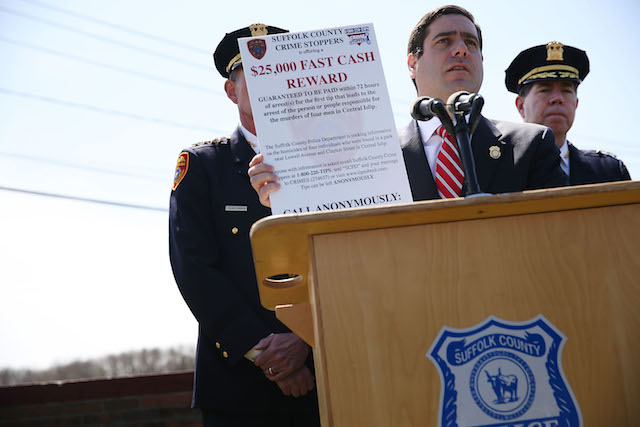 Howell, the CUNY professor, acquired the NYPD's criteria for gang affiliation in 2014, in response to a 2011 Freedom of Information Law request. Howell's research revealed that the NYPD already uses broad criteria. Specifically, any person who meets any two of the following: gang association, affiliated hand signs, colors, scars, tattoos, documents, or living in a "known gang location."

The new legislation would be "a big new step" in creating a criminal definition of gangs, Howell told Gothamist. "It includes changing a non-violent felony into a violent felony if the person is associated with a gang. It's enhancement based on association."

But Howell believes the deck is already stacked against defendants who are charged with conspiracy following large-scale gang sweeps. For example,103 people were indicted in a June 2014 raid of the Grant and Manhattanville houses in West Harlem. Of that total, 25 were charged with conspiracy in the first degree, an A-1 felony with sentences ranging from fifteen years to life. The vast majority of defendants took a plea (93 of the total), acquiring criminal records that can impact job and housing prospects. Many served at least a year on Rikers.

Defendant Kenneth Thomas, 21, was charged with conspiracy in the first degree based in part on Facebook posts and YouTube videos where he affiliated himself with the crew Money Avenue, according to the Manhattanville indictment.

"Even if the [state] bill doesn't pass the Assembly, the fact of the matter is here in progressive, liberal NYC we are already doing these things," Trujillo said, in reference to broad gang indictments.

Senator Golden's legislation is "holistic," he says, as it calls for the state Division of Criminal Justice Services to implement a gang violence prevention curriculum in New York schools. It would also create a "Criminal Street Gang Prevention Fund," fed by 40 percent of all money recovered during gang-related police activity.

"We must not only work to prevent the formation of gangs, but we should penalize them, track them, and educate them so the dangers they cause on our streets can be eliminated," Golden stated.

Advocates say they'd prefer more funding for programs entirely unaffiliated with the police, like NYC Cure Violence, which is overseen by the Department of Health and Health and Hospitals Corporation.

The NYPD deferred comment on Golden's bill to the Mayor's Office. A spokesperson for the mayor did not immediately respond to a request for comment.