Homeless advocacy group Homes For Every New Yorker (HFENY) released a report yesterday urging Mayor de Blasio to set aside 2,500 New York City Housing Authority (NYCHA) apartments for homeless families. The city currently sets aside a minimum of 750 NYCHA apartments to the homeless each fiscal year—far fewer than have been designated under previous mayoral administrations.

Another HFENY study, released in early April, found that homelessness in New York City has reached a record high: 60,000 New Yorkers slept in shelters in 2014, and one out of every 42 children spent at least one night in a shelter. In March, the Coalition for the Homeless reported a promising 300-family dip in city-wide homelessness since December, but still urged city and state legislators to address the issue.

Bloomberg cut homeless families and individuals completely out of the running for NYCHA in 2005, in what the report describes as a "disastrous policy change." However, although de Blasio reinstated the policy last year, advocates believe he set the minimum allotment too low. For comparison, HFENY points to the 1,251 set aside by Mayor Dinkins, 854 set aside by Giuliani, and 1,662 set aside by Bloomberg during his first term.

Yesterday afternoon, members of the homeless advocacy coalition rallied with about 30 supporters outside of City Hall, demanding that Mayor de Blasio increase his allotment of NYCHA units. Public Advocate Letitia James was in attendance, along with several council members. She said in a statement, "The City has direct control over thousands of public housing units that should be prioritized for those with the highest immediate housing needs."

HFENY spokeswoman Jennifer Flynn predicted that moving 2,500 families into NYCHA apartments, combined with the NY/NY agreement and increases in rental subsidies outlined in April's Ending Homelessness Report would "literally end mass homelessness for sure within the next five years." 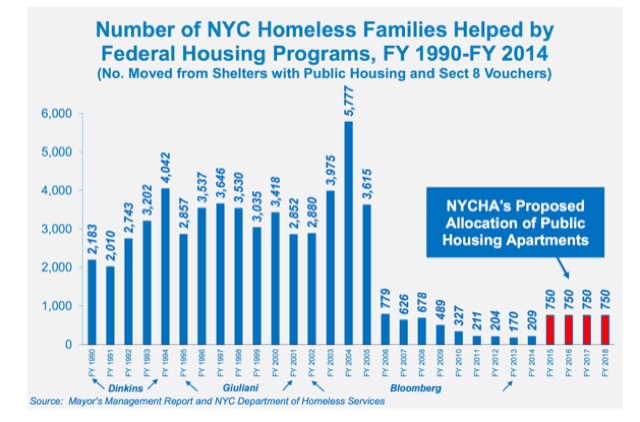 In lieu of more NYCHA spots, De Blasio has introduced the Living In Communities (LINC) program, which offers $1,000 bonuses to landlords willing to rent to homeless families. In turn, families pay 30% of the rent, while the city subsidizes the rest. As of January 21st, 2015, 132 families had moved out of shelters under LINC, City Limits reports. However, some homeless advocates worry that LINC, which only offers assistance for four years (unless you're elderly and frail) is not a permanent solution.

In response to the HFENY report, City Hall spokeswoman Ishanee Parikh pointed out that the Mayor's office exceeded its 750 family minimum goal last year, thanks to the help of Section 8 vouchers and Veteran Affairs Supportive Housing (VASH) Vouchers. In a statement issued yesterday, Parikh said:

“Last year, we moved a total of 1,100 homeless families to NYCHA apartments, and this year we're committed to moving over 2,000 homeless families into public housing, including domestic violence victims and veterans. NYCHA is one piece of the solution to our enormous homelessness crisis, and we are working aggressively to address this challenge.

"Today’s realities are very different from that of 15 or 20 years ago - we've lost thousands of units of affordable housing.... With such pressing demand for affordable housing, the de Blasio administration is leveraging NYCHA fairly to help different populations and combat our homelessness crisis."

The NYCHA apartments in question, which currently have a wait list of 270,000, aren't in the best shape. Earlier this month, the Department of Housing and Urban Development allocated $100 million to NYCHA. The money, which will go towards installing solar panels and updating heating systems, will potentially help NYCHA save money in heating costs. Still, Comptroller Stringer's 2014 NYCHA audit found the organization to be lacking in necessary maintenance worth an estimated $18 billion. "NYCHA conditions are bad," Flynn admitted. "But you know where the conditions are actually worse? In the housing shelters."

Ann Valdez of Community Voices Heard, a resident of the Coney Island Houses, attended yesterday's rally. She has lived in three separate NYCHA apartments over the course of the past 20 years, following a ten-month stint in a Brooklyn homeless shelter with her two small children. She said afterwards, "I myself have experienced a city shelter. I saw things in the city shelter that no one should have to see. I experienced a knife fight, and I had to fight to get my own lock and key to keep my children safe."

Valdez fears that there's a misconception about New York City's homeless shelters, and who ends up in them. "I was a victim of Hurricane Sandy, so I know that a lot of families have been displaced, and some of them haven't been able to get home yet," she said. "These are people who need the help, and we should give it to them."