The corner of Marcy Avenue and Division Street in south Williamsburg is home to the fleet of female day laborers, or jornaleras, as they call themselves. Even during freezing temperatures, women come to stand on the corner to await housecleaning jobs, mostly in the surrounding Hasidic sections of Williamsburg.

Earlier this year a video described the working conditions of the laborers; the ladies were susceptible to unfair wages, unsafe working conditions and sexual harassment, but often lacked the English skills or knowledge of their rights to speak up. The Worker's Justice Project, a group formed in 2010 for low wage immigrant workers, and the non-profit Center for Urban Pedagogy , have teamed up to release a guide for laborers called, "Stand Up to Clean Up." The guide is a short illustrated pamphlet with simple phrases and translations like, "This is my rate" or "How many hours would you like me to work?"

"Today, it's cold," Ligia Guallpa, the executive director of the Worker's Justice Project, said. "When everyone is in their offices, they don't realize these women are out in the streets, in the cold, looking for work."

Gaullpa said the group won't simply be handing the guides out to women—they're also going to teach laborers how to use them. There will be classes held to go over each page, and to encourage the women to use some of the tougher, if bulky, language in the booklet like, "I need to use a mop to protect myself from chronic and acute back and knee pains" or "I cannot mix two cleaners because it is dangerous." Such phrases can be tough for non-native speakers, and the guidance will help workers indicate specific problems they're facing in the workplace. 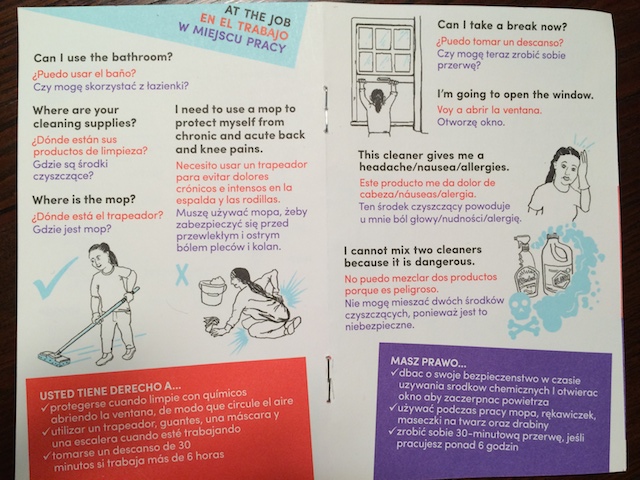 Lillian Gonzalez, a female day laborer, has been in New York for eight years since she moved here from Ecuador. She said she used to work below minimum wage and spent three years cleaning on her knees, because she didn't have any cleaning supplies.

"Now, with this, I can say it or point it out and say I have pain in my knees and back," she said.

Carmen Fajardo, also from Ecuador, said she began cleaning houses after working in a garment factory, where she only earned 10 cents for each piece of clothing completed. Unfortunately, she found that conditions as a housekeeper weren't much better.

"I remember that the cleaning products were very toxic and I didn’t have any protective equipment like gloves, or a mask," she said. "There were also few hours of work and it was really hard work, but it was poorly paid...unfortunately because I feared losing my job and didn’t know how to negotiate in English, and not really knowing my rights, I decided to accept those conditions."

She said the guide is about eliminating the fear that comes with being a female day laborer.

"We need to stand up, united together, to organize and ensure that our work is respected, is valued and is protected," she said. "We are the ones who make it possible that other families continue with their lives. That they can continue with their own professions."