The Christmas morning fire that ripped through a three-story Victorian home in Stamford, Connecticut, killed three girls—7-year-old twins and their 9-year-old sister—and their grandparents. The home on Shippan Avenue was owned by fashion advertising executive Madonna Badger, who managed to escape the blaze and was overhead screaming, "My whole life is in that house!"

The fire was reported around 4:52 a.m. and one neighbor who woke up at 4:45 a.m. to screaming told the Stamford Advocate, "There were flames coming out of the first-, second- and third-floor windows. The entire house was engulfed in flames. All I could see is flames coming out of every window and porch of the house." 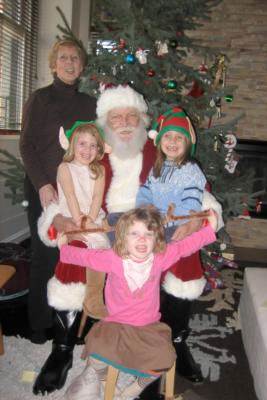 The victims: Lomer (dressed as Santa Claus) and Pauline Johnson, with grandchildren Lily, Grace and Sarah

Acting Fire Chief Antonio Conte said, "First units on the scene attempted rescue within the structure, they were pushed back by intense flame and heat. As a result we lost five Stamford residents." The five victims were Badger's daughters, Grace and Sarah, age 7, and Lily, 9, and Badger's parents, Lomer and Pauline Johnson. They were all removed from the home's second floor.

Badger and a male friend, identified as contractor Michael Borcina, who had been doing work on the house, survived and were taken to a local hospital. Another neighbor said Borcina was barefoot and in boxers outside the blazing home: "He had to be supported on both sides. He looked dazed. They looked shocked." Badger's estranged husband, Matthew Badger, was driven to the scene yesterday morning by Stamford police; his relative told the Post that he was "absolutely distraught."

Madonna Badger, a fashion branding executive who rose to fame for developing the Marky Mark and Kate Moss campaigns for Calvin Klein, had been living in New York but bought the home last December for $1.725 million and neighbors said the home had been undergoing renovations for months. A deputy fire chief told the NY Times, "It did not appear that the renovations were part of the cause; they might have been part of the spread."

The Times also detailed Badger's parents, who had moved to Southbury, CT from Kentucky to be closer to their grandchildren:

Ms. Badger’s parents, Lomer and Pauline Johnson, who died in the fire, were to celebrate their 49th anniversary on Monday, according to a family member, who asked not to be named.

Mr. Johnson, 71, spent his last day working at his dream job: as Santa Claus on the ninth floor of the Saks Fifth Avenue flagship store in Manhattan, the family member said. He was known for his real long, white beard.

“That’s all he ever wanted to be,” the family member said. “He stopped shaving the day he retired.”

On his ad as "Happy Santa" on gigmasters, Lomer Johnson said, "I am now a santa because my oldest grandaughter asked me to be a pretend Santa Claus. I have enjoyed it more than any job I've ever had. As a pretend Santa Claus, I have, with our four young grandaughters and my wife, visited two nursing homes. Truely a winning experience for both the young and the not so young."