In the early evenings, Beautique is an upscale Midtown restaurant boasting a James Beard-nominated mixologist, a former Gordon Ramsay pastry chef, and pricy dishes such as "crab flan" and filet mignon. Once the kitchen closes, however, the restaurant turns into what it describes as "one of the hottest nightclubs in New York City," and what others have called a "sex den to the Real Housewives of New York." Actress La Rivers, who's appeared in Spider-Man 3, Law and Order, and Sex and the City, among other credits, was leaving Beautique last June when she says she was brutally assaulted by one of the lounge's managers. She's now filing a lawsuit claiming that "Beautique specifically caters to beautiful women, ensuring that they comprise the bulk of the clientele, to create a 'playpen' atmosphere for rich men."

At a press conference yesterday, attorney Gloria Allred, who's gained recognition for taking on cases regarding women's rights (including multiple women who have sued Bill Cosby for raping them), recounted the events of the night of June 20th, 2015: Rivers's father was in town to celebrate her appearance in Love for Passion, a short film that had appeared in the Manhattan Film Festival just the day before. Together with her father and some friends, Rivers went to see the premiere of the film at the Player's Theater downtown, and then went to a nearby cafe for dinner. At about 12:30 a.m., the group decided to visit Beautique, having heard good things about the lounge, and Rivers, who remained sober the whole time, left at about 2 a.m.

It was at that point that Edward Moffett, then a manager at Beautique, allegedly tried to take the taxi she had just hailed, and attacked Rivers when she pointed out that he was taking her cab, Allred said.

Moffett flew into a "misogynistic rage," in Allred's words, allegedly calling Rivers a "cunt" and a "bitch" before attacking her "with such force that she fell immediately to the ground and was knocked unconscious." According to the criminal complaint against Moffett, he then punched her in the face. When Rivers awoke, she had blood streaming out of her nose, a black eye in formation, and a huge contusion on her forehead. The nice outfit that she'd worn out was drenched in blood.

"I went to Beautique thinking that it was the perfect place to end our fantastic evening, showing my father a nice time at a luxurious and chic place surrounded by the beauty of midtown Manhattan," Rivers said on Wednesday afternoon, visibly upset. "Instead, it turned out to be a living nightmare...I haven't slept one full night since last June. The feeling of danger possibly being nearby hasn't ever left my mind." 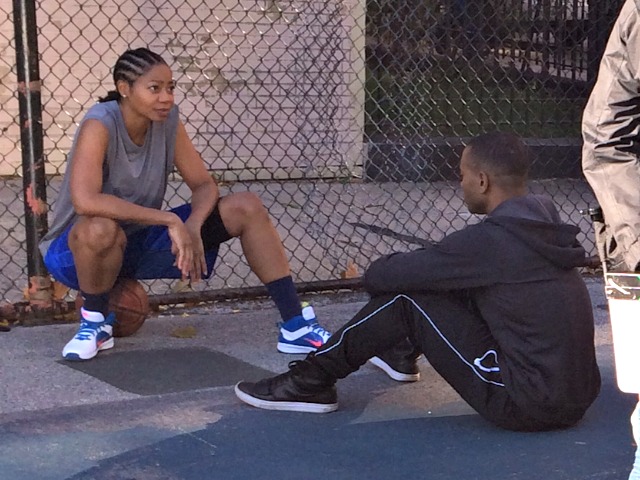 Rivers in "Love for Passion," whose premiere she was celebrating the night she was attacked. (via GoFundMe)

The attack gave Rivers a concussion and four broken bones in her nose that required reconstructive surgery. Her lawsuit claims that in addition to causing her trauma, the assault impaired her ability to work, as her work as an actress is dependent on her appearance and presentation.

Moffett was arrested following the alleged attack, and there is a criminal case pending in New York criminal court, in which he's charged with misdemeanor assault and harassment. However, that case is pending, and Allred and Rivers are pursuing civil penalties before the statute of limitations is up. They're seeking unspecified damages, and are demanding a trial by jury.

Rivers is suing both Moffett and Beautique itself, as she says that Beautique was negligent in hiring Moffett, who had a criminal history, according to this suit: he's apparently pleaded guilty to assault, attempted assault, and aggravated harassment in the past.

A person who answered the phone at Beautique Wednesday afternoon said that Moffett is no longer employed by the establishment, but that management will not be commenting. A lawyer for Moffett wasn't immediately available.