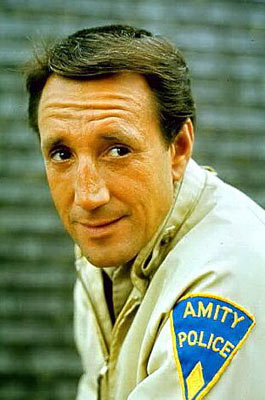 Actor Roy Scheider died yesterday at the University of Arkansas for Medical Sciences in Little Rock, after battling multiple myeloma for several years and suffering complications from a staph infection. He was 75 and had been living in Sag Harbor, New York (after moving out his house in Sagaponack that Billy Joel purchased).

Scheider may be best known for his role as Police Chief Martin Brody in Jaws. One of his lines from the movie, "You're gonna need a bigger boat," was voted #35 on the American Film Institute's list of top 100 movie quotes in 2005. However, the New Jersey born actor made his mark before that in movies like The French Connection and Klute. The latter was his first major movie role, it took place in New York and he played Jane Fonda's pimp.

Before hitting the big screen, he played Mercutio in 1961's New York Shakespeare Festival production of “Romeo and Juliet.” He later returned to the stage in Harold Pinter’s 1980 production of “Betrayal”. In recent years, he had been seen in a recurring role on Third Watch and in an episode of Law & Order: Criminal Intent last year.

Later in his life Scheider had become politically active, amongst other things he protested military action in Iraq at a New York demonstration in March 2003 alongside 125,000 other activists.The NY Times recaps his life on and off the stage and screen, noting that he helped found the Hayground School in Bridgehampton along with poet Kathy Engle. The school is "dedicated to creating an innovative, culturally diverse learning environment for local children. At the time of his death, Mr. Scheider was involved in a project to build a film studio in Florence, Italy, for a series about the history of the Renaissance."