One of the largest real estate developers in the country has submitted plans to demolish a row of five Beaux Arts-style tenement buildings in the East Village to make way for a luxury hotel specifically branded to draw millennials, despite a push from local preservationists who argue the buildings should be given landmark status.

Opponents to the planned Moxy Hotel also find it suspect that demolition permits have been submitted by Lightstone Group, which is headed by David Lichtenstein—a developer who has made sizable donations to New York democrats and was recently appointed by Mayor de Blasio to the NYC Economic Development Corporation's Board of Directors. In defense of their case that the tenements should be protected, opponents note that the Landmarks Preservation Commission recommended the block of East 11th Street between Third and Fourth Avenues as a possible historical district as recently as 2008.

"The only thing that's changed since 2008 is who the mayor is and who the owner [of the buildings] is, and the owner now is one of Mayor de Blasio's major fundraisers and political allies," said Andrew Berman, President of the Greenwich Village Society for Historic Preservation. "That's a sort of stunning level of hypocrisy."

Lightstone filed a demolition permit application on Thursday, August 4th, according to the Department of Buildings. It has not been approved as of Tuesday, though DNAinfo noted this week that pre-demolition asbestos abatement is already underway at the addresses, located across the street from Webster Hall.

As Public Advocate, Mayor de Blasio supported Lightstone's luxury development on the Gowanus Canal, which is designated 20% below-market rate and received 56,000 applicants for 86 of its affordable units this spring. Also this spring, the New York Post reported that Lichtenstein was the developer behind a $50,000 donation to Nassau County democrats, reportedly at the request of Ross Offinger, de Blasio's former campaign treasurer. 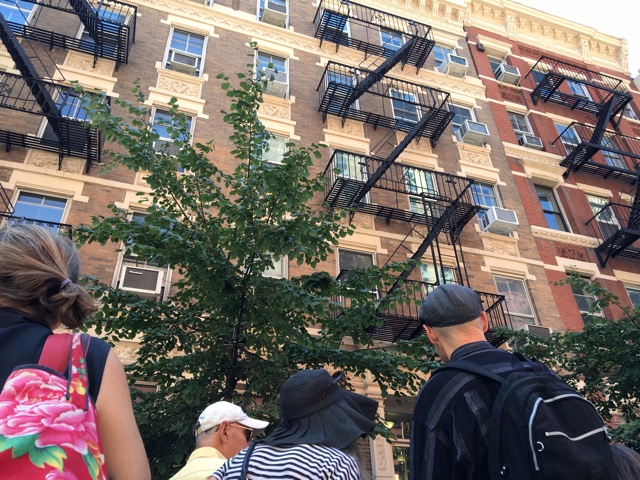 The Moxy Hotel brand, a self-described "new millennial-focused boutique hotel concept," is a subset of Marriott, with outposts in Europe and the French Quarter in New Orleans. It boasts mirrored elevators with photo booth props to encourage selfies. ("We want to entertain you and give our guests an opportunity to gain some social currency," the Marriott's global brand director for Moxy told WSJ in December.) Rooms are priced somewhere between a hostel and a traditional hotel, and come with Netflix, tap beer, and ample USB ports.

"The mayor says housing is his number one priority," Berman said. "Well, here are five buildings that for generations housed a considerable amount of affordable housing that are going to be torn down for a trendy, hip hotel where young globe trotters with dispensable income will make a pit stop."

A good hot iron can sort out any kind of crooked mess. 😉 Get into the steamy hot goodness #atthemoxy.

The Real Deal first reported on the East 11th Street hotel project in May, prompting Berman's group and other preservation-minded organizations including the Historic Districts Council to send a letter to the Landmarks Preservation Commission, urging that city office to schedule a public hearing to discuss the possibility of landmarking the tenements. The groups say their request garnered no response until after Lightstone filed demolition permits. On August 9th, the LPC confirmed that the block in question was not suitable for a historic district.

But a spokeswoman for the LPC countered that there was nothing suspect in the decision to notify the preservation groups after the demolition application was submitted, clarifying that it's within the LPC's rights to designate a landmark up until a demolition permit application is approved.

"After careful review, the Commission responded to this inquiry on August 9th, finding that the nine buildings submitted for historic district consideration lack cohesion and a distinct sense of place in terms of age, scale, typology and their siting on only a portion of the block," the LPC stated on Monday. "And therefore, do not rise to the level of architectural significance necessary for designation as an historic district."

#Regram: @mikeymcclain #📷 The Moxy has provided us with everything we need… Even Coop with a ‘stache. #atthemoxy #moxytempe

The Mayor's office reiterated the LPC's decision, adding that Lightstone's project at 112-120 11th Street is "as-of-right," meaning it doesn't require approvals from the City Planning Commission or City Council, much less input from local community boards. It has no affordability requirements, and no requirement to accommodate housing.

"The Landmarks Preservation Commission determined these buildings did not meet the merits of historic designation," said Mayoral spokesman Austin Finan. "Moreover, that designation would not have prevented the property's conversion into a hotel."

"It is our understanding that the LPC reviewed and formally rejected the Request for Eligibility," said Lightstone in a statement.

According to the Greenwich Village Society for Historic Preservation, 112-120 11th Street were occupied until a few weeks ago. The group isn't sure when tenants vacated, and under what circumstances. Lightstone did not respond to multiple requests for comment on this process.

State Senator Brad Hoylman addressed protesters on Monday, pledging to investigate the circumstances under which the apartments were emptied. His office maintains that some of the units were rent-regulated. "This goes to the heart of the on-going fight across Manhattan to preserve historic buildings, not only for the sake of neighborhood character, but also because they often contain affordable, rent-regulated units, as in this instance," he stated.

"Let's say everything was done totally legally," Berman offered. "That still means that housing that could be affordable could be lost."