Activist Rescues Sheep From Brooklyn Butcher, But It's The Wrong Sheep

Well, there's a good news/bad news coda to yesterday's "Sheep Escapes Brooklyn Butcher, Gets 'Rescued' By Artist, Will Die Tomorrow" story. An animal rights activist who tried to save the sheep managed to convince the butcher to simply hand one over, for free. That sheep is now bound for a life of leisure and profound contemplation upstate at Farm Sanctuary. Unfortunately, it was NOT the sheep that busted out of the slaughterhouse and made a mad dash for freedom through the streets of Sunset Park.

We spoke to New Jersey-based activist Mike Stura as he drove the rescued sheep up to Farm Sanctuary this afternoon. He tells us that after he saw the story (which was first reported by DNAinfo) he jumped in his truck and hauled ass to Sunset Park. En route, he managed to get the slaughterhouse owner on the phone and started bargaining for the sheep's life.

"I told him that when animals escape a place like his, the owner will often allow that animal to go live its life on a sanctuary to create goodwill in the public," Stura said. "He asked me what I would do with her, and I said I would give it to a sanctuary. He finally asked me what I'd like him to do. I said, 'Give her to me.' He thought about it for a minute and, finally, he said okay." 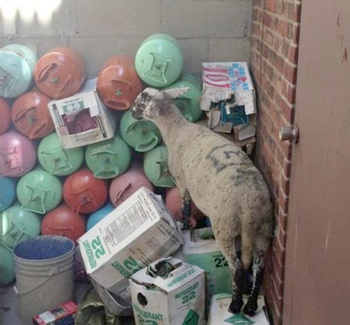 According to Stura, the Al Noor Halal Meat Market was very busy when he arrived, because it's a Muslim holiday. "I think it's called the Feast of the Slaughter," Stura explained. "There were a lot of people coming in and out. There were whole animals without their skins hanging there. I found the owner and he sent one of his employees to go and get her [the sheep]. They brought her out and I immediately saw it was a different sheep."

Stura didn't object. "What are you gonna do?" he asked. "I wasn't going to say, 'This isn't her, take this one back and kill it.' I was very grateful, I brought the sheep home."

But Stura couldn't sleep. The thought of the escaped sheep being sentenced to death haunted him, and this morning he woke up early and drove back to the slaughterhouse.
Upon arrival, he told the owner, "It was the wrong girl, the other girl had a number tag on her back." But the owner, Mohammed Aldeen, explained that "once they have a name and number on them, they are set aside for a family who ordered them. So she wasn't there anymore. I looked in, I did not see her."

Asked if he offered Aldeen any money, Stura said, "No. I'm an activist. If I wanted to I could go to a live auction and buy as many animals to free as I want. But you don't want to encourage people to do that because then the seller gets what he wants, so what's to discourage him?"

While he was waiting at the slaughterhouse to see if the escaped sheep could be found, Stura said a friend of Aldeen's "started telling me about the holiday and the ritual, and Abraham and Ishmael and all that." When it was confirmed that the escaped sheep had already been slaughtered, Stura says Aldeen "put his hand on my shoulder and said, 'My friend, at least you saved one life.' It's a funny thing for a guy who owns a slaughterhouse to say that to you and mean it. I think he felt bad for me."

In the end, the escaped sheep paid the ultimate sacrifice for the liberation of one of her sisters. Stura hopes Farm Sanctuary will name her Aysha, which he says means "alive and well" in Arabic.

Aldeen was not available for comment when we called, but Meredith Turner, a spokesperson for Farm Sanctuary, says the sheep "should be arriving any minute. It’s a happy ending for a different sheep, sparked by the brave action of another—which is really very moving. The lamb’s escape still ended in a life being saved though—on a day when thousands of animals were being killed in the city for religious sacrifice—so there is still a happy ending, just not for the little lamb who made the brave dash."