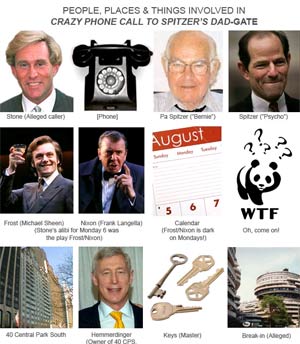 It's been too long since we've checked in with Roger Stone, the GOP operative who is suspected of making a threatening call to Governor Spitzer's father. The Sun reports that Stone, who was asked to resign his $20,000/month gig consulting for NY State Republicans, has apologized to Dale Hemmerdinger, the owner of his apartment building and friend of Spitzer.

Spitzer's father's lawyers say that a call (which included the invective, "You will be compelled by the Senate sergeant at arms, if you resist, you will be arrested and brought to Albany - and there's not a goddamn thing your phony, psycho piece of s--- son can do about it. Bernie, your phony loans are about to catch up with you.") from someone who sounded just like Stone was made from Stone's 40 Central Park South apartment building. Stone contended that the call was spliced together using audiotapes made from his talk show appearances and that Hemmerdinger must have been behind it, pointing out that Hemmerdinger had access to apartment keys. The Sun excerpted Stone's letter:

In his letter, Mr. Stone said, "It was inappropriate for me to suggest that just because you are a major Democratic fund raiser, major Spitzer fund raiser, and the Governor's appointee to the MTA, that you would wrongly enter my apartment or have someone do so on your behalf, even though management has access and keys to every apartment."

He wrote: "I regret any inconvenience or distress my initial comments may have caused."

Stone's alibi in the matter seemed waterlogged after he said he was at the play Frost/Nixon on the night of the alleged call - August 6. It turned out that August 6 is a Monday, when plays are dark and that Stone actually saw the play on Wednesday, August 8. Stone now blames the date mix-up on the first reporter who called him.

This ridiculousness stems from Spitzer's fight with State Senate Majority Leader Bruno, which has included dirty tricks-ing from Spitzer's staff. Bruno has kept relatively quiet recently, but he did announce improved future Amtrak service between Albany and NYC, perhaps to make his days relying on state aircraft more manageable.

In other Spitzer news, the Governor told an upstate TV journalist to "get a life" after a question about using state troopers to dig up dirt on Senate Majority Leader Joseph Bruno. Justin Moss of WBNG-TV repeatedly asked Spitzer about "Troopergate". Moss later said, "It caught me off guard for sure. What do you say to that?"