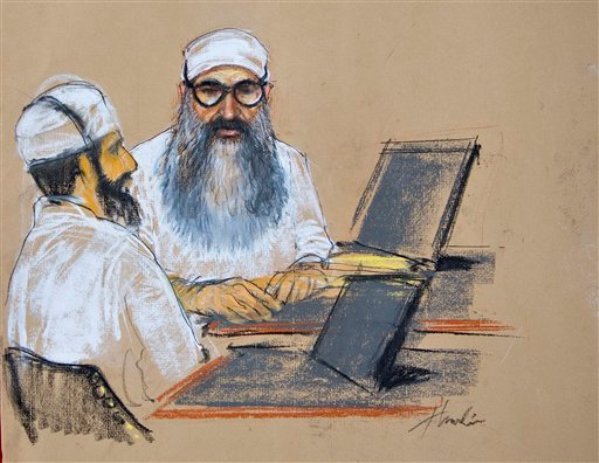 Who knew that Al Qaeda operatives felt so strongly about their courtroom portraits? Khaild Sheikh Mohammed, who was officially arraigned yesterday for his role in the September 11, 2001 attacks (he allegedly suggested and oversaw the plan), took exception to the sketch made by courtroom artist Jane Hamlin and asked her to change his nose. Military officials must review all courtroom sketches before releasing them to the press, and, in this instance, Defense Department officials shared them with the defense. According to Defense Department spokesman Cdr. Jeffrey Gordon, Mohammed thought his nose looked too big, "He said he wanted his nose to look like the FBI photo" (pictured).

Therefore, Hamlin made the change. She said, "I'll concede that the nose wasn't flattering...I shortened it and slimmed it down." At least Mohammed's co-defendant Walid bin Attash liked his drawing; Hamlin was told he said, "Oh, look, that's me! That's great."

Gordon used the opportunity to say, "It shows the lengths we go to take [defendants'] desires into consideration."

#9/11 trial
#courtroom sketch
#gitmo
#guantanamo bay
#khalid sheikh mohammed
#September 11 attacks
Do you know the scoop? Comment below or Send us a Tip