Last night's Democratic Comptroller debate between former Governor Eliot Spitzer and Manhattan Borough President Scott Stringer was a struggle between the man who has dedicated himself to the city's Democratic firmament and the disgraced Sheriff itching to be deputized once more. Both drew blood, and it was shockingly entertaining.

The debate, co-sponsored by Gothamist and our partners, was held by the Campaign Finance Board and moderated by NY1's Errol Louis and WNYC's Brian Lehrer.

Each candidate tried to peg the other as somehow lacking in the skills needed for the position (which, by the way, involves managing the city's pensions funds and oversees city contracts): Stringer portrayed Spitzer as someone who had their chance and blew it, and Spitzer placed Stringer as part of a "backroom cabal," who let Bloomberg have his voter-unapproved third term. The two candidates discussed style more than policy, as their politics resemble one another too closely for there to be much of debate.

One major difference between the two candidates is where they're getting their campaign money. At the outset of the debate, Stringer pointed out that Spitzer wasn't supposed to be there: the former governor and state attorney general is using his own real estate fortune to run, thereby eschewing public funds and the campaign finance board. Stringer said this made Spitzer look like a "Republican."

But Brian Lehrer asked Stringer a pointed question: the city's real estate and Wall Street establishments have opened their checkbooks to him—doesn't this make Spitzer the natural candidate for the people? Stringer gave an answer about having to build a "coalition," but it wasn't entirely reassuring.

Spitzer filled in the blanks for his opponent: "You are an ally of Wall Street," he said. "That's why they support your campaign, because they don't want an independent voice."

Stringer repeatedly pointed out how Spitzer had failed the people of New York while governor, resigning amid a federal investigation (you may remember that one). Spitzer, meanwhile, questioned what the low-key politician had done in his time in the State Assembly and as Manhattan Borough President.

Asked what exactly he would do as Comptroller, Spitzer explained, "You oversee pension funds and understand capital funds. And you use the city's pension fund as a vehicle for change." 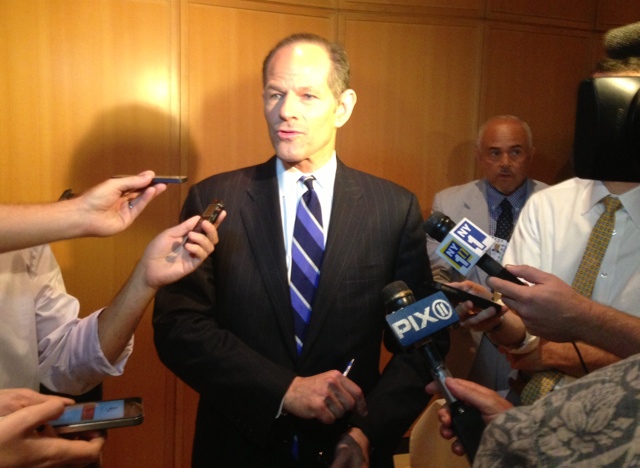 Change was a recurring theme. Without a single mention of the current embattled Comptroller, John Liu, the candidates explained how they would use oversight of city contracts and investments to change fundamental elements of the city. Both claimed to be the middle class candidate.

"You were tampering with banking laws to hide your crime while I was fighting for the middle class," Stringer snapped back. "I was fighting while you were hiding after you had to abdicate from your responsibility."

The debate began with a discussion of yesterday's landmark ruling against the NYPD's Stop and Frisk policy. Both candidates voiced their long-held opposition to the practice. Stringer pointed out how many millions the city loses in lawsuits brought against the NYPD (hundreds of millions in the past decade), and how practices can be studied and changed to both save the city money and improve relations between the NYPD and communities of color. Spitzer countered that it was Stringer's acquiescence on Bloomberg's overturn of term limits (which he mentioned at least three times) that has damaged many communities' relationships with the NYPD.

"The police department has failed to address the issues of these policing tactics," Spitzer said. "The mayor, which Scott [Stringer] supported, has been unresponsive to what the people of the city and I have reported on for a long time." 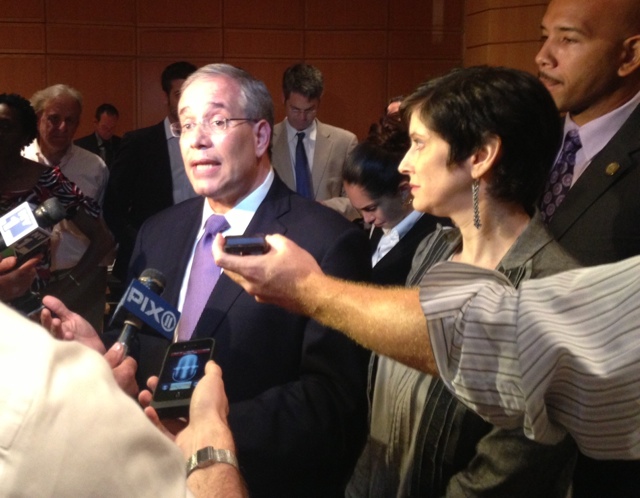 Stringer grew animated at the accusation that he's an agent of some backroom business/democratic machine cabal (how many cabals can one borough president belong to?). "You are what's wrong with this country," Stringer accused the former governor. "You think you can buy an office. You're not out there in the living rooms talking to people.... during Sandy you were in a TV studio criticizing us, but I was out there, trying to help people get what they need."

For Spitzer, the office of Comptroller represents both a position he is incredibly qualified for and a mark of his fall from grace. Asked if this was the most excited he's ever been for a job, Spitzer hesitated, and then declined to give a straight answer. In contrast, Stringer supplied an enthusiastic "Yes!"

During a lightning round of the debate, the candidates cleared some things up: They have never ridden on Citi Bikes nor had a cronut; Stringer has only voted for Democrats (he seemed disgusted by the question, which was, "Have you ever voted for a Republican?"), while Spitzer has never bounced a check. They have always tipped their cabbies and they both support paid sick leave.

When Spitzer said that the city is working towards preparing for another storm, Stringer responded that yes, he is actively doing that now. Later on, Stringer pointed out that he was out there helping New Yorkers after Hurricane Sandy, while Spitzer was nowhere to be seen, "You didn't get your hands dirty."

Spitzer replied, "Scott, I got my hands dirty for 10 years as attorney general, as governor," and Stringer smirked, "That you did. That you did."

Stringer, roughly the same age as Spitzer, and enjoying the support of some prominent young New Yorkers, declared that it was time for a new generation of politicians. "I'm not the celebrity candidate in this race, but I've never disgraced my constituents," he said.

"I'm speaking up for the voiceless," Spitzer declared. "This position isn't about counting the money, it's about making the money count." Spitzer has already begun tapping into his campaign chest on expensive ad buys and has surged to a nine-point lead over Stringer.

With no debates left to remind voters of Spitzer's shameful fall, Stringer was asked after the debate if his advertising was going to be negative. He thought for a moment. "They're going to be truthful."

You can watch the whole debate here.

#comptroller debate
#Election 2013
#eliot spitzer
#NYC Comptroller
#scott stringer
#original
Do you know the scoop? Comment below or Send us a Tip