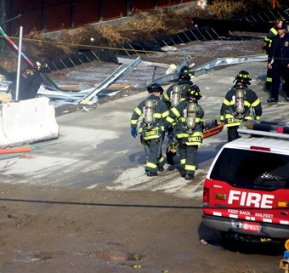 A construction crane crushed construction trailers and trapped a worker this morning. According to 1010WINS, the FDNY says "the crane dropped a load of steel it was carrying and crushed the trailers. At least one person was rescued; his condition was not immediately available."

The accident took place at 200 Vesey Street - the very site where Goldman Sachs is building a new world headquarters. The city and state gave Goldman Sachs $650 million in incentives to build there (hello, Liberty Bonds!) to build across from the site where Freedom Tower will rise. The construction company is Tishman.

Reports from the Lower Manhattan Construction Command Center have shown that there is an incredible amount of work being done downtown, especially near the World Trade Center site. 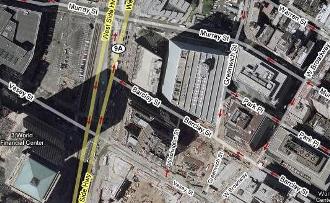 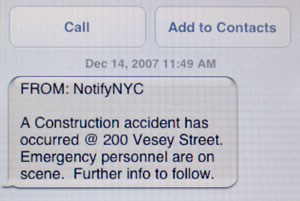 And NotifyNYC, the city's alert-messaging program, sent out a message about the accident.

Update: The injured worker was an architect. Apparently the "nylon sling that was carrying...25- to 30-foot-long pieces of galvanized steel..." snapped. AUGH! The architect was taken to St. Vincent's - it's unclear what kind of condition he or she is in.