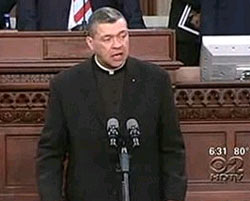 Monsingor Wallace A. Harris, the pastor of Saint Charles Borromeo Parish, stepped down yesterday due to allegations he abused minors. The Archdiocese of New York has barred him from practicing until the Advisory Review Board makes a decision.

Apparently the Archdiocese was told of an allegation and referred the matter to the Manhattan DA's office. During the DA's office' investigation, another allegation was made, and, according to the Daily News, prosecutors told the archdiocese, "subsequently directed Harris to step aside while the cases are resolved."

Harris, who gave a prayer at Governor David Paterson's inauguration, says he's innocent; a statement released by the Archdiocese said, "Msgr. Harris has denied the allegations, which concern actions that allegedly occurred 20 years ago." Harris was also event coordinator for Pope Benedict's mass at Yankee Stadium. One parishioner told WCBS 2, "I was very hurt and I was very shocked because I do not believe it to be true. I've know Monsignor Harris for many a year. He's been round my kids, my kids been round him." But

#Archdiocese of New York
#sex abuse
#sex abuse allegations
#Wallace Harris
Do you know the scoop? Comment below or Send us a Tip
A new Gothamist is coming! We’ve moved comments over to our beta site. Click here to join the conversation and get a preview of our new website.